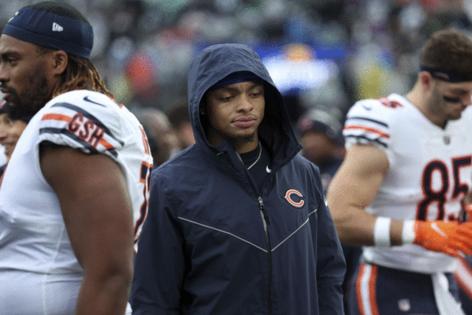 But the Chicago Bears quarterback said he won’t fully know if he’s ready to play Sunday against the Green Bay Packers at Soldier Field until he gets through more practices.

Fields again was limited at the first Bears practice of the week, held inside the Walter Payton Center because of high winds in Lake Forest. In the portion of the practice open to the media, he ran through ball security drills holding the football with his left arm and threw several times on the move.

Last week, he said he felt pain handing the ball off and finishing his throws. He spoke before practice Wednesday but indicated he needs to get to a point where he feels like he can be productive while playing through the discomfort.

Fields said he thought he had a chance to play against the New York Jets in Week 12 but didn’t feel comfortable enough in warmups. Bears coach Matt Eberflus said Fields also didn’t have medical clearance or the OK of coaches or general manager Ryan Poles.

The Bears quarterback situation is in such a state of flux that the team had to bring in a fourth-string option, signing Tim Boyle off the Detroit Lions practice squad.

Trevor Siemian, who injured his oblique before Sunday’s loss to the Jets but played through the injury, didn’t practice Wednesday. Third-string quarterback Nathan Peterman, who briefly was slated to start against the Jets if Siemian didn’t play, was expected to take some team reps Wednesday and should be in line to start if Fields and Siemian can’t play.

Peterman was a Buffalo Bills’ fifth-round pick in 2017 and has four career starts, his last in 2018. He threw three interceptions in a Bears’ 41-9 victory in that game.