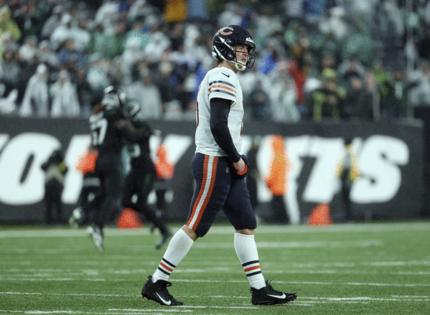 Last week, a day after the Chicago Bears lost their fourth consecutive game and fell to the bottom of the NFC, defensive lineman Justin Jones was asked how he and his teammates were handling the flood of losses, how players were digging deep to find the investment needed to persevere through this wayward season.

As a team captain, Jones knows his approach matters and his words must resonate. He spoke from the heart.

A different version of that question came knocking again Sunday after the Bears suffered their worst loss of the year, a 31-10 drubbing by the New York Jets that also included a wave of injuries to key players.

The Bears finished November without a victory and fell to 3-9. Starting quarterback Justin Fields missed the game with a shoulder injury. Among the most notable injuries to occur, wide receiver Darnell Mooney suffered a season-ending ankle injury and safety Eddie Jackson went down with a foot issue that is likely to keep him out a while.

Quite frankly, inside the Bears locker room, Sunday felt like a terrible, horrible, no good, very bad day. The mood reflected that. Yet with the NFL’s extended regular season, the Bears still had 42 days and five games remaining, needing once again to reset and dig deep.

Jones was asked where the Bears will find the requisite push and concentration level to avoid surrendering to frustration and fatigue.

The Bears haven’t won since Oct. 24. That was the night they registered a signature victory on “Monday Night Football,” hammering the New England Patriots 33-14 and experiencing an offensive breakthrough that created a wave of promise — for the future.