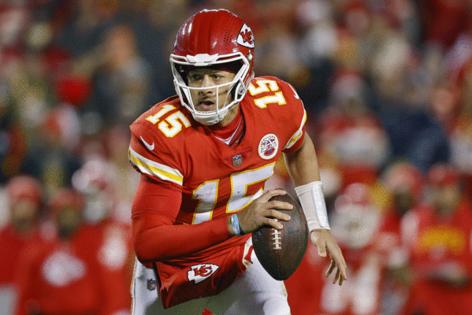 Each week of the NFL season, The Baltimore Sun will rank all 32 NFL teams. The rankings will take into account not just weekly performance, injuries and roster depth, but how well each team measures up as Super Bowl contenders.

Here are the rankings heading into Week 13:

In an unpredictable season, the top contenders are clear. The Chiefs rolled to a 26-10 win over the hapless Rams on Sunday, while the Eagles became the first team to reach 10 wins by holding off the Packers, 40-33. Kansas City and Philadelphia took advantage of injuries to star quarterbacks Matthew Stafford and Aaron Rodgers, but that’s what good teams do.

As long as quarterback Patrick Mahomes and tight end Travis Kelce are healthy, the Chiefs are pretty much unstoppable. Mahomes threw for 320 yards and a touchdown while Kelce had four catches for 57 yards, including a 39-yard score to open the game. The Kansas City defense also showed its strength, intercepting backup quarterback Bryce Perkins twice and limiting the Rams to 3.6 yards per play. Even though the Chiefs scored a touchdown just once in six trips inside the red zone, with Mahomes throwing an interception in the end zone in the fourth quarter, they remained in total control. That’s a testament to their quality on both sides of the ball.

For Philadelphia, the win Sunday night showed just how dominant they can be on offense. Behind one of the league’s best offensive lines, the Eagles piled up 363 rushing yards, their most since they had a franchise-record 376 in 1948 against Washington. Quarterback Jalen Hurts bolstered his case to be the league’s Most Valuable Player, becoming the first player since at least 1950 with at least 150 rushing yards, 150 passing yards and multiple touchdown passes in the same game. Hurts and running back Miles Sanders also became the first teammates to run for at least 125 yards apiece since San Francisco’s Frank Gore (158) and Colin Kaepernick (151) on Dec. 20, 2014. The defense is a bit of a concern, especially if safety C.J. Gardner-Johnson’s rib injury is serious, but the offense is good enough to carry the Eagles to the No. 1 seed in the NFC.

MOBILE, Ala. — Tom Brady’s voice shook Wednesday morning when he said “I wouldn’t change a thing” as he announced his retirement “for good.”

It was difficult in that moment not to wonder about Brady the ...Read More

Amazing, isn't it? Forty-four years after Mike Renfro, the NFL still can't get the simple things right. Like whether a critical pass in a conference championship game hit the ground (which it very clearly did).

TAMPA, Fla. — There never will be another Tom Brady. The Bucs knew their time with the future Hall of Famer would be short, and it proved sweeter than anyone could have hoped.

LOS ANGELES — Only Patrick Mahomes threw for more yards this season than Justin Herbert, who finished tied for second in the NFL in game-winning drives.