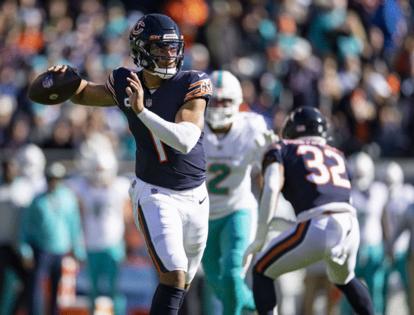 CHICAGO — Don’t worry, Cole Kmet said, Trevor Siemian will not take it as an insult if you say he is unlikely to keep the ball on a zone read and motor 60 yards through the New York Jets defense Sunday at MetLife Stadium.

“Definitely more of a drop-back guy, get the ball out, timing,” Kmet said. “We’re not going to be running QB power with Trevor.”

The Chicago Bears offense figures to take on a different look if Siemian is called on to replace Justin Fields, who is questionable with a separated left shoulder suffered on a quarterback sweep near the end Sunday’s loss to the Atlanta Falcons.

It’s also likely to look different if Fields plays. The Bears surely don’t want to put him at risk of making the injury — which includes a partially torn ligament — worse. With either quarterback, the Bears likely will need to throw the ball more.

Yes, the Bears offense will take on a new look if Fields — who entered the week ranked fifth in the NFL in rushing with 834 yards — is not leading the league’s top-ranked rushing offense (197.9 yards per game) against a Jets defense ranked 10th against both the run and pass.

It will be interesting to see how the Bears fare after averaging 29.5 points over the last five games with Fields accounting for 15 touchdowns — nine passing and six rushing. While the surge in scoring resulted in only one victory, the offense has done its job with the exception of mounting scoring drives in the closing minutes of games.

The Bears have scored 24 points or more in the five games since the “mini bye” following the Oct. 13 loss to the Washington Commanders, and that’s a notable achievement in these parts. They’ve had only four other such streaks since the start of the 1996 season.

But with Fields potentially out and running back Khalil Herbert on injured reserve with a hip issue, it’s fair to wonder if the ground attack can be nearly as powerful leaning on David Montgomery and Trestan Ebner.

It puts offensive coordinator Luke Getsy and (likely?) Siemian in a position in which the Bears will have to rely much more on the passing game. They are averaging a league-low 20.8 pass attempts per game, 8.3 less than the 32nd-ranked Philadelphia Eagles from last season. The Bears’ current average is so low, the last offense to finish worse was the 1977 San Francisco 49ers at 19.8. Offensive football has changed so much in 45 years, and while the scoring surge has been welcome, it’s not sustainable to average 128 net passing yards as the Bears have.

There have been questions all season about why the Bears aren’t getting wide receiver Darnell Mooney, Kmet or new acquisition Chase Claypool more involved. The simple answer is there aren’t a lot of targets to go around when throwing the ball so infrequently.