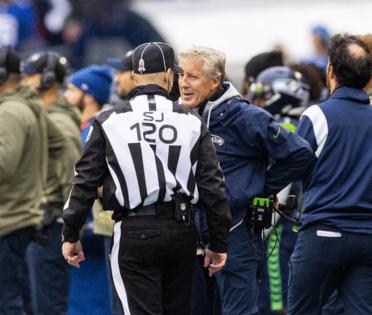 RENTON, Wash. — In the early days of the Legion of Boom-era Seahawks, the team’s first-year players didn’t hit the proverbial “rookie wall” late in the season so much as run right through it.

And it was the ability to get the most out of rookies in those early years that was a key to the fast finishes that quickly became a Pete Carroll trademark.

Since 2012, the Seahawks are tied with the Kansas City Chiefs for the most regular-season wins in November, December and January with a record of 61-29.

The Seahawks will need to replicate that success to try to complete their so-far-surprising playoff run, let alone hold off the San Francisco 49ers in the NFC West.

But Carroll is predictably confident that Seattle’s heralded nine-man draft class is not only ready to pick up where it left off before the bye week but take off even higher thanks in part to getting some much-needed rest following the trip to Germany to play Tampa Bay.

Carroll felt the bye came at a particularly good time for the rookies, who with preseason games thrown in have already played what is basically a full college season — 13 games — and now will play seven more, with the Seahawks hoping there will additional games to follow.

“Hopefully, we can make it into that,” he said of the bye week providing a boost to the rookies. “We’ve talked that way with them. Just stepping away from it can give you a chance to see things differently, a little more clearly. I’m hoping that is what takes place right now, but for them, I think it is really a convenient opportunity for them just physically, too.”

That happening is especially critical for the Seahawks this year as almost no team in the NFL is leaning on its rookies as much as Seattle.

Seattle’s rookies have played a combined 2,880 offensive and defensive snaps, second in the NFL behind Houston’s 3,047.

And Seattle has had six rookies start a game — all six starting at least three — the most in the NFL.

Mike Tomlin answered 23 questions at his weekly press briefing on Tuesday. Three of the first seven were about Diontae Johnson. Surprisingly, Tomlin wasn't asked if he has put out a missing-person bulletin on Johnson, who ...Read More

Titans 27, Packers 17: Treylon Burks has barely played over half of Tennessee’s snaps, but has still received 14 targets in ...Read More

ALLEN PARK, Mich. — Based on ticket sales for Thursday's game against the Buffalo Bills, the Detroit Lions are anticipating the second-largest home crowd in Ford Field's 20-year history.

"There's going to be a lot of narratives about our team," the Vikings coach said Sunday...Read More

Beyond stringing together the best three games of his career before Thanksgiving and the Dolphins’ Sunday ...Read More

NEW YORK — It has been a rollercoaster 72 hours for Jets quarterback Zach Wilson.

Following the Jets' 10-3 loss to the Patriots on Sunday, Wilson failed to take any responsibility for the team’s lack of offensive ...Read More