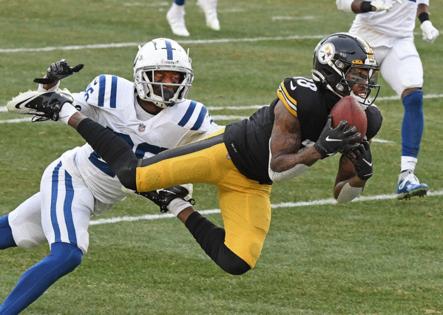 Mike Tomlin answered 23 questions at his weekly press briefing on Tuesday. Three of the first seven were about Diontae Johnson. Surprisingly, Tomlin wasn't asked if he has put out a missing-person bulletin on Johnson, who hasn't been seen much on a football field this season.

Johnson hardly was seen at all on Sunday in the Steelers' 37-30 loss to the Cincinnati Bengals. He was targeted just five times and had four catches for 21 yards. Ten games into the season, he still doesn't have a touchdown catch.

This is the team's alleged top receiver?

"I don't really want to speak too much on that," said a forlorn-looking-and-sounding Johnson after the Bengals game. "A lot of that stuff is out of my control. I know it looks like I'm not involved, but it is what it is. The situation that I'm in, I've got to deal with it."

This isn't what Johnson was expecting after his first three NFL seasons, all of which were productive. Last season, his 107 catches tied for fifth-most in the league. His 1,161 receiving yards ranked 10th. He had eight touchdown catches.

Johnson is tied for 14th in the NFL with 51 catches. His 456 receiving yards rank 47th, just behind Pat Freiermuth (482) and just ahead of George Pickens (453). Most alarming, his average yards per catch is 8.9, down from 10.9 last season. How troubling is that? Hines Ward averaged 8.3 yards per catch in his final season when he no longer could play.

This also wasn't what the Steelers expected from Johnson after they signed him to a two-year, $36.7 million contract extension in August that runs through the 2024 season. His salary cap hit of $7.6 million ranks fifth on the team this season and will jump to fourth next season at $16.3 million behind only T.J. Watt, Cam Heyward and Minkah Fitzpatrick.

At the time, Johnson's new deal seemed like a bargain because of the way the market had exploded for wide receivers.

Titans 27, Packers 17: Treylon Burks has barely played over half of Tennessee’s snaps, but has still received 14 targets in ...Read More

ALLEN PARK, Mich. — Based on ticket sales for Thursday's game against the Buffalo Bills, the Detroit Lions are anticipating the second-largest home crowd in Ford Field's 20-year history.

"There's going to be a lot of narratives about our team," the Vikings coach said Sunday...Read More

Beyond stringing together the best three games of his career before Thanksgiving and the Dolphins’ Sunday ...Read More

NEW YORK — It has been a rollercoaster 72 hours for Jets quarterback Zach Wilson.

Following the Jets' 10-3 loss to the Patriots on Sunday, Wilson failed to take any responsibility for the team’s lack of offensive ...Read More

As of Thanksgiving, the Steelers are out of the NFL basement in most major statistical offensive categories. They’re third-to-last in yards per play (4.8) fifth-to-last in points per game (17) and tied for second-to-last...Read More