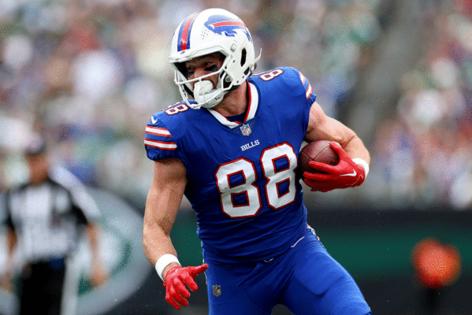 Titans 27, Packers 17: Treylon Burks has barely played over half of Tennessee’s snaps, but has still received 14 targets in two games since returning from injured reserve following his foot injury. With Ryan Tannehill playing well — he’s the overall QB8 since returning from his own injury Week 10 — and defenses forced to account for Derrick Henry, the rookie playmaker could make a big difference down the stretch.

Falcons 27, Bears 24: With Khalil Herbert sidelined, David Montgomery has RB1 upside. Montgomery had 121 total yards on 20 touches and a touchdown against Atlanta.

Bills 31, Browns 23: James Cooks received 11 carries and two targets in only 16 snaps, running for 86 yards against Cleveland. Cooks isn’t a viable starting option yet — he needs more playing time for that — but there’s value in rostering him.

Eagles 17, Colts 16: Alec Pierce actually paced Indianapolis with eight targets — there may be hope for the rookie after all — but only produced three receptions for 28 yards.

Patriots 10, Jets 3: Rhamondre Stevenson has received at least five targets in seven of the last eight games. Stevenson has at least six receptions, 56 yards or a TD reception in four straight. This is indicative of the weekly upside he carries.

Saints 27, Rams 20: Juwan Johnson is the overall TE3 across all formats since Week 6 — only Travis Kelce and George Kittle are ahead of him — on the strength of five TDs in the last five games and consistent usage.

Lions 31, Giants 18: Jamaal Williams doesn’t score a TD in every game, but when he does score, he usually scores multiple times. He’s scored a TD in six of 10 games this season. He’s scored at least twice in five of those six games (including a hat trick against New York).

Ravens 13, Panthers 3: Lamar Jackson is the overall QB15 since Week 4. I’m starting to get concerned.