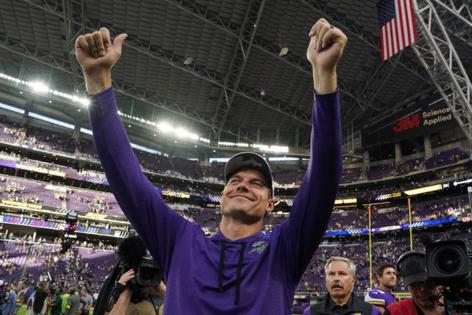 "There's going to be a lot of narratives about our team," the Vikings coach said Sunday evening.

A no-show performance of that degree provides an easy opening for outsiders to shoot arrows at the target. The storyline would have been a single-track narrative if, say, the Vikings had suffered a close, hard-fought loss coming off a sugar high from their Buffalo thriller.

Hey, it happens … Teams experience letdowns after big wins all the time … The Cowboys are a good team … The Vikings were due for a loss.

The 37-point loss belongs in its own unique category. The performance was so wretched that it was remarkable. You just don't see NFL games that competitively lopsided too often. Like roasting a marshmallow with a butane torch, it was over quickly.

And now the rookie head coach faces his next big test.

The schedule gave O'Connell 90-plus hours to identify what the heck happened that caused his team to be so emotionally and physically flat, address it with players, fix problems, extinguish any remaining frustration, and steer his team back to a positive headspace to play another game on a short week ... against a coach regarded as the NFL's all-time greatest, Bill Belichick, a shark who knows the smell of blood.

So, yeah, this is an interesting moment for O'Connell.

"I just know each and every week in this league is another opportunity to really prove who you are as a football team," O'Connell said.