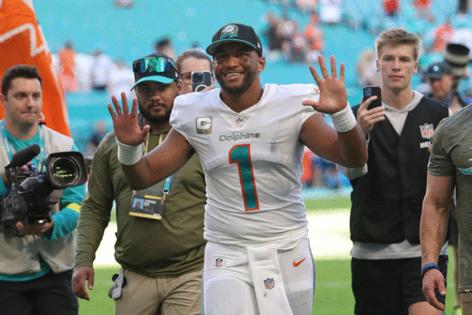 Beyond stringing together the best three games of his career before Thanksgiving and the Dolphins’ Sunday matchup with the Houston Texans, Tagovailoa and his wife welcomed a baby boy, Ace, to the world in recent months.

For Tagovailoa, fatherhood has offered him a fresh perspective.

“It’s very unique how having a child impacts how you see things differently in life,” Tagovailoa said. “It’s like nothing that I’ve ever experienced. There’s no playbook for this.

“I’ve always had a tremendous amount of heart for kids, but now that I have one of my own, you go home and the best thing is when you see them smile and laughing. It’s the best thing in the world.”

And Tagovailoa is thankful that his first crack at being a dad is with a son.

“I thank my Heavenly Father up above that I got a boy first,” he said laughing. “Oh, man. I don’t know what I’d do if I had a girl. It’d be a little harder, I think, because I wouldn’t know what to do necessarily.

“Having been around cousins that have had kids that were boys, it kind of makes it a little easier that I have a boy myself with my wife.”

Tagovailoa mentioned the rest of his family, his parents, siblings and wife, as well. He said he’s thankful for his Dolphins teammates, coaches and support staff.

As Tagovailoa has played three consecutive games with a quarterback rating of 135.0 or better, the three best outings of his career, the offseason addition of wide receiver Tyreek Hill and coach Mike McDaniel’s offense can all be attributed as factors for his improved play in Year 3. But longtime offensive coordinator and quarterback guru Darrell Bevell, Miami’s quarterbacks coach who took in Tagovailoa this offseason, also should be credited for his improvement.

“Very detail-oriented,” said Tagovailoa of Bevell. “My relationship with Bev has really grown a lot.”

Right around when Tagovailoa got hot over the past three games, he had Bevell and his family over to his house to watch a movie and have dinner.

“[He has a] great family,” Tagovailoa said. “I think having someone of his personality where, regardless of how cool you guys are, if you’re not on top of your stuff, he’s going to let you know. That’s kind of the relationship that I would say I have with him.”

McDaniel constantly evolving the Dolphins offense over the course of the season has also allowed Tagovailoa to flourish.

“A lot of things are new in our passing game and in our running game and our play-action game,” Tagovailoa said. “He’s always working on things that can grow the offense and help the offense, so there’s a lot of nuances.”

When Ace Tagovailoa grows older, Tua Tagovailoa may one day tell him how a key season for his career development came after the Tagovailoas brought him into the world.

Following the team’s bye week, the Dolphins (7-3) remain a 7-0 in games where Tagovailoa has started and come away healthy. In the past three games specifically, Tagovailoa has thrown nine touchdowns to no interceptions, completing 76.5 percent of passes for 969 yards.

It has all helped Tagovailoa lead the NFL in passer rating (118.4 on the season) as he already has established a career high in touchdown passes (18).

The third-year quarterback and first-year captain is making sure his teammates stay ready for the 1-8-1 Texans as they come off the bye and have the West Coast road trip — at San Francisco and Los Angeles — that follows.

“It’s most definitely really important for us to stay locked in,” he said. “We understand that we’ve had a bye and now Thanksgiving is coming up. Guys have family members coming in town, and you can get lost with not doing things that you would normally do on a weekly basis where maybe I’ll take this day off because it’s Thanksgiving and guys aren’t studying. I don’t think that’s the case for our guys. I know a lot of our guys were itching to come back.”

Tagovailoa said he’s hosting a Thanksgiving dinner at his house and all his Dolphins teammates are invited.

Tua Tagovailoa’s parents said this past week he’ll play next season. He remains in concussion protocol and will skip the Pro Bowl. Hall of Fame coach Bill Parcells wrote the Miami Dolphins are at risk relying on him.

KANSAS CITY, Mo. — They are, arguably, the two best quarterbacks in the NFL, Super Bowl-tested and in their mid-20s.

KANSAS CITY, Mo. — Maybe this sounds familiar: Once upon a time, the Chiefs lost three straight times in less than a year to a bitter (and cocky) rival. Those defeats were lowlighted by an agonizing collapse on the cusp ...Read More

PITTSBURGH — I was sad when Buffalo lost to Cincinnati last week but not for the reasons you might think.

I am not a Bills fan — don't particularly care for the Bills, to be honest — and while the Damar Hamlin story...Read More

SAN DIEGO — As the drama unfolded Saturday afternoon in the final round of the Farmers Insurance Open, a significant discussion centered on ... leader Sam Ryder's pants?

Ryder wore joggers, cuffed at the bottom and ...Read More