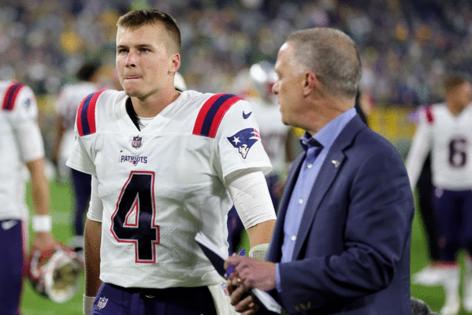 Seriously? A rookie having to come on at Lambeau Field and play his first NFL snaps? And duel with Aaron Rodgers no less?

Only, there was no disaster. There was no blowout, and no reason for the Patriots to hang their heads leaving the historic field.

Even in defeat, this was an impressive performance, as the Zappe-led Patriots valiantly hung in with the Packers at Lambeau Field, battling into overtime.

Yes, they lost, with Mason Crosby kicking the game-winner in overtime to give the Packers a 27-24 win. And, they fell to 1-3 on the season, good for last place in the AFC East four games in.

But we learned so much more about the Patriots in a losing effort. There was actually plenty to be encouraged about as they go forward without Mac Jones (high ankle sprain) and possibly Brian Hoyer (concussion).

What did we learn?

We learned Bill Belichick still hasn’t lost his fastball. He still knows how to coach, especially under dire circumstances. We also discovered Matt Patricia is getting the hang of calling offense, especially considering he had to deal with having the backup to the backup in the game.