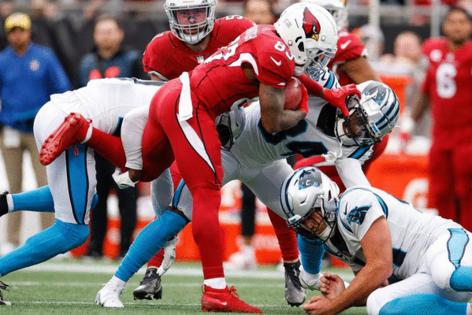 What’s going wrong is the reason the stands were only about two-thirds full — at best — at Bank of America Stadium on Sunday in Carolina’s 26-16 loss to Arizona, and will likely be less full one week from now for the next home game.

The Panthers (1-3) are boring because they have a sludge-filled, mistake-prone offense. Carolina was rightly booed by its home fans after Baker Mayfield had a fourth-down pass tipped at the line — his fourth tipped ball of the game, and it wouldn’t be the last — with 9:13 left and Carolina down by 10.

By then, this game was all but over, because Carolina simply can’t score enough. The Panthers’ defense would be good enough to win for a number of teams, but their offense treats a 100-yard football field like it’s a trek across the Sahara. The boos came on about every other offensive play by the end of the game, on a day the Panthers were trying to celebrate the legacy of the late linebacker Sam Mills. There was no “Keep Pounding” here, though — for the Arizona defense, it was more like “Keep Tipping.”

And, for Panther head coach Matt Rhule, this can’t be a comfortable feeling. Now 11-26 in his 37 games as Carolina’s head coach, Rhule’s future will soon be in jeopardy if these losing ways continue, if it isn’t already.

Carolina got staked to a 7-0 lead for the second week in a row by its defense Sunday, this time when linebacker Frankie Luvu sliced in front of a Kyler Murray pass, picked it off and returned it 33 yards for a score.

This time, though, the Panthers couldn’t hold the lead. Arguably their best throw of the game came on a fourth-down fake punt by punter Johnny Hekker, only for it to be nullified by Damien Wilson illegally running downfield as if he didn’t know the Panthers were running a fake. Mayfield’s awful afternoon was filled with skipped passes, dropped passes and, most notably, tipped passes.

Murray, who was once Mayfield’s backup at Oklahoma, wasn’t a ton better, but he was better. With Arizona (2-2) down 10-3 at halftime, he led the Cardinals on an 89-yard, third-quarter touchdown drive that began practically in the shadow of his own end zone. That got the game to 10-all and began a run of 23 straight points by Arizona.

At the beginning of the fourth quarter, the score was still 10-10, but you could feel Carolina’s defense wearing out thanks to an offense that could never stay on the field.

Arizona got a field goal early in the fourth quarter, taking a 13-10 lead that was its first lead of the day. Normally, a three-point lead isn’t much in an NFL game, especially against a team with one of the worst pass defenses in the league (as Arizona had coming in).

But Mayfield, who has long had an unfortunate side hustle of getting passes tipped at the line, immediately had another one tipped — this time by Arizona defensive end J.J. Watt. It was then intercepted by Dennis Gardeck, who returned the ball 24 yards to Carolina’s 5. It took Murray only two plays to score, as he ran the ball in untouched from 4 yards out to give Arizona a 20-10 lead with 10:26 to go.

Soon, the boos would come, as the Panthers lost for the 10th time in their past 11 games dating back to last season.

Luvu’s return was electrifying and the biggest play of the day for the Panthers. Luvu had been part of the Panthers’ 7-0 lead a week before, when he ripped the ball from New Orleans running back Alvin Kamara, then threw a block as Marquis Haynes picked it up and ran 44 yards for a touchdown.

This time Luvu did it on his own, as he undercut the route and scored on the pick-6 early in the second quarter.

But Carolina’s offense was too often anemic, as it has been for much of the first month of the season. Wide receivers DJ Moore and Robbie Anderson once again were rarely factors.

Running back Christian McCaffrey played, after missing most of the week of practice due to a quad injury, but was largely ineffective, although he did score a late touchdown with 4:47 to go. By then, though, it was too little, too late.