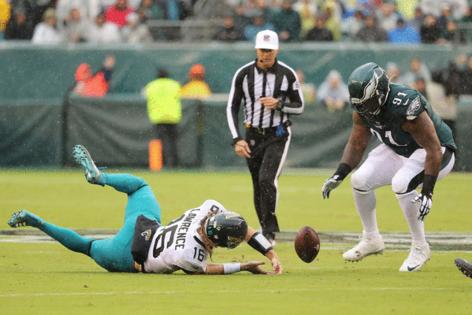 Who could have predicted the first week of October would have brought these things to pass?

The Miami Dolphins are forcing the NFL to rewrite its concussion rules. Good ol’ boys are stuffing fish with leaden balls to cheat at fishing tournaments. Antonio Brown was shown flashing his backside and his frontside at a woman in a pool in Dubai.

And the undefeated Philadelphia Eagles are the best team in football. They’re 4-0 for the first time since 2004. They went to the Super Bowl that 2004 season.

On Sunday, they proved they can do it again.

“I don’t think anybody can beat us right now,” Miles Sanders, who ran for a career-high 134 yards and two touchdown, told me after squirming out of his well-used shoulder pads. “Everybody’s beatable, but if we lose, we’ll be beating ourselves.”

Jacksonville’s good, suddenly; or, perhaps this underscores how awful a coach Urban Meyer was for Jacksonville in 2021.

And how good a coach Nick Sirianni has become in his second season as Pederson’s replacement.

This is no fluke. The Birds are complete, and they are resilient.