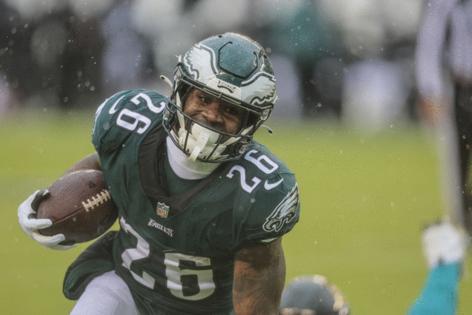 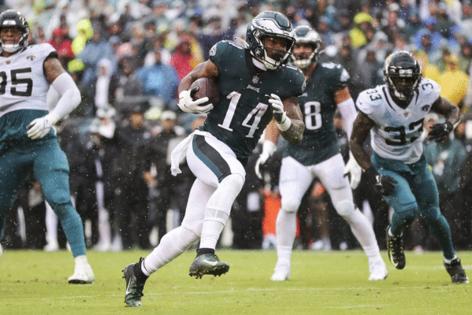 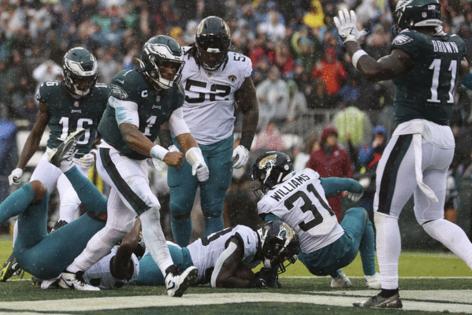 PHILADELPHIA — Even on a wet, blustery day, the Eagles found a way to stay hot.

The team overcame a sluggish start to maintain its undefeated record, beating the Jacksonville Jaguars, 29-21, on a rain-soaked Sunday at Lincoln Financial Field.

The Eagles (4-0) preserved their status as the lone undefeated team in the NFL against a Jaguars team led by former Eagles coach Doug Pederson. The Jaguars that came into the weekend with two straight impressive wins but were held in check for most of Sunday.

The weather conditions affected both sides, but the Eagles offense was dominant on the ground. The defense forced five turnovers and made second-year Jaguars quarterback Trevor Lawrence look uncomfortable.

Here are the instant takeaways from the game:

After a slow start in suboptimal conditions, Jalen Hurts helped turn the tide.

The Eagles quarterback had a few chunk completions to A.J. Brown and Dallas Goedert to set the team up in the red zone, but faced a fourth-and-goal from the 3-yard line. Hurts dropped back to pass, and after scanning the defense, broke for the goal line.

Hurts scored on the play, but he paid the price, taking a hard shot to the helmet from Jaguars rookie linebacker Devin Lloyd as he surged for the end zone. His efforts on the do-or-die play were pivotal, getting the Eagles on the board and sparking a 20-0 scoring run in the second quarter.

Hurts was 4 for 5 on the drive for 47 yards and added 16 rushing yards on the seven-play, 57-yard drive that featured a costly offensive pass interference that nullified a Brown touchdown.