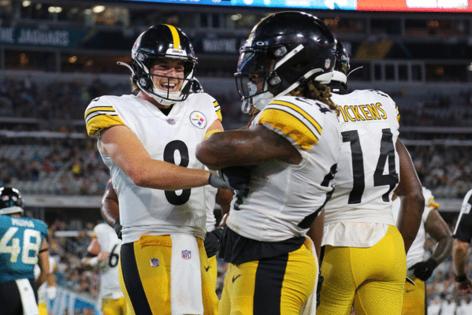 PITTSBURGH — Michael Irvin's assertion the Steelers should be playing Kenny Pickett right now to "see what everything else happens" and comparing it to Troy Aikman's rookie season with the Dallas Cowboys is as baseless and ridiculous as his "playing offensive line is as easy as anything" comment.

Irvin said the Cowboys learned a lot about Aikman — his toughness, his character — even though the Cowboys never won any of the 11 games he started and he threw nine touchdowns compared to 18 interceptions. He thinks the Steelers should do the same and find out about their rookie quarterback.

"I believe it would be a jolt of energy and maybe — maybe you start seeing something," Irvin said.

Yeah, maybe. But the situations are entirely different.

Aikman was the No. 1 overall choice in the 1989 draft, the acclaimed gem in a class that included three other Pro Football Hall of Famers among the top five picks — Barry Sanders, Derrick Thomas and Deion Sanders. There is a reason the Cowboys were able to select him with the top pick: They were 3-13 in 1988, the worst team in football. Their quarterback was Steve Pelluer, who had an 8-19 record in five seasons in Dallas. He was not Roger Staubach or even Tony Romo. Of course the Cowboys were going to play him right away.

That is not the case with Pickett.

The only similarity with Aikman is each were the first quarterback selected in their respective year.

Pickett, though, was the 20th overall pick in a draft that never saw another quarterback picked until the third round. Unlike Aikman, he was going to a team that had been to the playoffs each of the past two seasons and three of the previous four. What's more, he would start off behind a quarterback, Mitch Trubisky, whose career record as a starter was 29-21 and had made two playoff appearances with the Chicago Bears.

Quarterbacks selected in the bottom half of the draft typically aren't viewed as immediate saviors, mainly because the teams selecting that low aren't among the bottom-feeders in the league.

Since 2000, there have been 11 quarterbacks drafted in the first round with the 20th pick — Pickett's spot — or lower. Only one, Brandon Weeden, who was selected 22nd by the Cleveland Browns in 2012, started the first game of the season. And why not? The Browns were 4-12 the year before and their quarterbacks were Thad Lewis and Colt McCoy.

Even Lamar Jackson, who was taken with the 32nd overall pick in 2018, didn't start until Week 10 with the Baltimore Ravens. At the time, the Ravens were 4-5 and had lost three in a row. Jackson would go on to win six of the Ravens' final eight games.

Quarterbacks such as Joe Burrow (Cincinnati), Trevor Lawrence (Jacksonville), Kyler Murray (Arizona) — all recent No. 1 overall picks — were instant starters in the NFL. But that's no surprise. Like Aikman, they were going to the teams that, among them, hadn't won more than three games the previous season. Even the quarterback they will face on Sunday, Zach Wilson, who was the second pick behind Lawrence in 2021, was an instant starter because the New York Jets were 2-14 the previous year.

Those teams have no other choice but to play the quarterbacks they believe can change their fortunes.

Such is not the case with Pickett. In time, he will be the Steelers' starting quarterback. But they signed Trubisky in free agency as part of a plan to not rush their No. 1 pick into the lineup until he was ready.

Agree with them or not, the Steelers believe they are a playoff-caliber team. Their recent history suggests as much. And Mike Tomlin believes the quarterback who best keeps them in contention for that is Trubisky, at least for now.

The time will come when a change is made. But there is a difference between No. 1 overall picks going to bad teams and what is happening with the Steelers. To compare the two is as crazy as comparing Michael Irvin to Limas Sweed.

MINNEAPOLIS — Warning: This column contains all kinds of biases, including personal, recency, positional and geographical. If I can find a few more along the way, I will toss them in like extra potatoes in a stew.

CHICAGO — Don’t worry, Cole Kmet said, Trevor Siemian will not take it as an insult if you say he is unlikely to keep the ball on a zone read and motor 60 yards through the New York Jets defense Sunday at MetLife ...Read More

TAMPA, Fla. — Bucs running back Rachaad White will make his second NFL start Sunday at Cleveland. He’s earned it, but this time it’s also by default.

Leonard Fournette on Saturday was downgraded from doubtful to out...Read More

SEATTLE — I wrote last week that success can prompt regret, using the Washington Huskies football team as Exhibit A. Despite having an improbable nine wins thus far — including one on the road against then-No. 6 Oregon...Read More