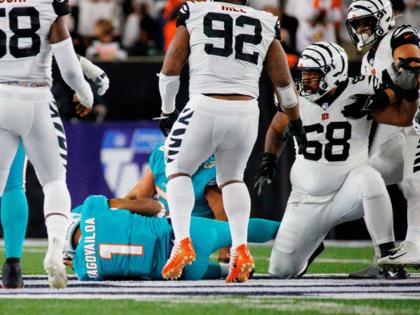 MIAMI — Imagine how we would all be seeing the positive and defiantly doubling down on our optimism about the Miami Dolphins and this season had the game been simply a 27-15 road loss to a Cincinnati Bengals team that made the Super Bowl last season.

The Dolphins stand 3-1 at roughly the NFL season’s quarter mark, against the toughest four-game gauntlet on the NFL schedule. In succession they beat Bill Belichick and Lamar Jackson and Josh Allen before falling to Joe Burrow. Offered that, any sane fan would have jumped at it.

But everything changed Thursday night, as quarterback Tua Tagovailoa lay motionless on the football field, and in the ugly aftermath as speculation and innuendo went malignant and metastasized across Twitter and social media.

A foreboding shadow has been cast across the Dolphins for the way they handled, or failed to handle, allowing Tua to play at all in the game. Everybody is speaking with the luxury of hindsight. Self-appointed amateur neurosurgeons are declaring diagnoses from their living rooms.

Representative actual tweet: “My dad, a neurosurgeon, said that Tua most likely had a cervical spine injury. Season over, career potentially.”

That, from Dr. Dad watching on TV.

The national diagnosis and verdict seems to be that the Dolphins are guilty of letting Tagovailoa play when he should not have. Because he had briefly left Sunday’s game with an apparent concussion that turned out to be (said Tua and the team) a back injury. He was examined but not found to be concussed, and was questionable for Thursday’s game because of his back and also a mild ankle sprain.

Yet many in the the medical profession — none of whom has met or examined Tagovailoa or seen any of his medical charts — seem comfortable second-guessing and virtually indicting the Dolphins for wrongdoing.

One of them, Dr. Chris Nowinski, who has a PhD behavioral neuroscience, was invited onto the Dan Le Batard Show With Stugotz on Friday morning. He said:

“This is such a medical disaster that if I’m Tua and I recover from this, which is not guaranteed, I might say I don’t want to play for this team anymore because of what they did. He should have been rested so his brain could recover. No doctor should have believed him when he said his back hurt.”