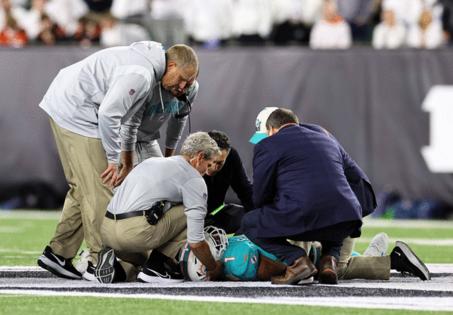 This is Amazon’s first year broadcasting NFL games, so you’d expect a couple of bumps along the way. But the tech giant’s Thursday Night Football broadcast received a healthy dose of criticism over its coverage of Tua Tagovailoa’s injury.

During the second quarter of the Cincinnati Bengals’ 27-15 win over the Miami Dolphins, Tagovailoa was taken off the field on a stretcher and hospitalized after being sacked by Josh Tupou. It was the second hit in the head Tagovailoa suffered in five days, which Thursday Night Football announcers Al Michaels and Kirk Herbstreit mentioned briefly after the young quarterback went down.

At halftime, no one on Amazon’s studio team — Charissa Thompson, Tony Gonzalez, Ryan Fitzpatrick, or Richard Sherman— mentioned that Tagovailoa was tested for a concussion after Sunday’s game. There was also no mention of an investigation requested by the NFL Players Association into the decision to allow Tagovailoa to return to Sunday’s game.

“As a former teammate and friend of Tua, I thought Fitzpatrick would have been angry that he played 4 days after what happened in Bills game,” longtime Buffalo News columnist Alan Pergament wrote on Twitter. “But that was probably expecting too much from a rookie announcer.”

Pergament wasn’t alone in his criticism of Amazon’s halftime show. The Ringer’s Bryan Curtis wrote that “a host or reporter has to provide that context and cover the story.” Sports Illustrated’s Jimmy Traina criticized the crew for making no mention of the Dolphins “letting him play after he literally didn’t know where he was.”

“To have any credibility whatsoever, Amazon must have someone who will raise the obvious question of whether Tua should have been playing at all tonight, after what happened on Sunday,” wrote Pro Football Talk’s Mike Florio, who is also an analyst on NBC’s Football Night in America.

Producers might have seen the criticism bubbling up on social media, because in the fourth quarter, Michaels and Herbstreit went away from the game for a minute to sum up what happened to Tagovailoa over the past week. Michaels referred to the situation as a “hornet’s nest.”

Amazon’s studio analysts were also more willing to discuss last week’s injury to Tagovailoa following the game. Former ESPN host Michael Smith clearly explained the context of Tagovailoa’s two injuries, and former Los Angeles Rams offensive lineman Andrew Whitworth recalled a game against the Eagles in which he suffered a concussion and was allowed to re-enter the game.

“I was able to get myself through the test, explain that I’m fine, knowing that I had been dinged pretty good,” Whitworth said. “I had a teammate that was like, ‘Man, this guy is just not right. And I don’t feel right, letting him keep playing.’ And he actually pulled me out of the game and told the coaches I need to be removed. And I’m so thankful for that.”