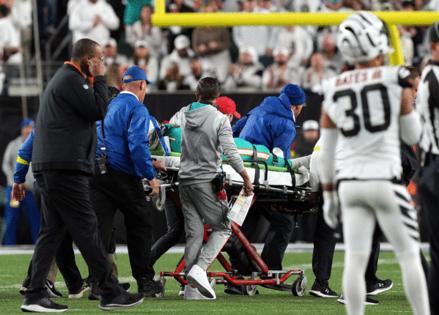 We’ll never believe the Miami Dolphins or the NFL again. Not after what happened with Tua.

On Sunday, Dolphins quarterback Tua Tagovailoa suffered a concussion, obvious to anyone with eyes: He hit his head on the turf, rose, staggered, and left for examination. One of those sets of eyes belonged to Dr. Kester J. Nedd, a neurologist and the former team physician for the University of Miami’s football team.

“No question at all,” Nedd told The Philadelphia Inquirer on Friday. “If you experience loss of motor functions — that’s a no-go sign. Clearly, he was neurologically impaired.”

The Dolphins said Tagovailoa had a back problem and trotted him back out on the field for the second half. Then they cleared him to play just four days later. Tagovailoa absorbed a similar hit. This time, he left on a stretcher.

“I was appalled,” Nedd said. “I didn’t agree with the judgment to allow him to return to play in the first game.”

Nedd is the medical director at the University of Miami’s Sports Center and is the director of the concussion program. He spoke Friday morning, as the world awakened to film and images of the latest NFL miscarriage of safety: Tagovailoa on his back, seemingly paralyzed.

It’s called “fencing reflex”: A person takes a head shot, falls, and his splayed fingers petrify into unnatural positions. The person’s brain has been slammed against its skull, the cerebrum shuts down, and the more primitive brain stem takes over.

We saw it in 2019 when Ravens safety Earl Thomas connected with an illegal helmet-to-helmet shot on Steelers quarterback Mason Rudolph that knocked out Rudolph and left his right arm frozen, like a fencer in the “en garde” stance.

We saw it again Thursday night, when Bengals tackle Josh Tupou legally brought Tagovailoa to the ground. Tagovailoa’s head slammed onto the turf, and he spasmed into a grotesque position that horrified viewers.

Their horror was amplified by what had come before.