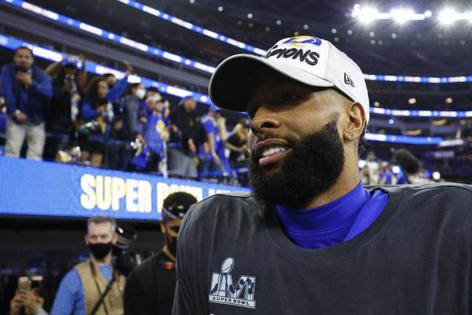 LOS ANGELES — Save for a couple of backpacks stored on the cushioned blue bench seat, the locker sits respectfully unused.

The nameplate below the space for a helmet: ODELL BECKHAM JR.

The Rams, in a bit of wishful thinking, have not reassigned the locker — not while Beckham, superstar receiver and current free agent, remains on the market while working his way back from knee surgery.

"It makes you smile every day you come in and see it," offensive lineman Rob Havenstein said of the locker directly across from his. "It makes me think of my guy. Miss him. Love him.

Last November, a few days before they played the San Francisco 49ers at Levi's Stadium on "Monday Night Football," the Rams signed Beckham to a one-year, incentive-laden contract.

Coach Sean McVay did not waste time incorporating the three-time Pro Bowl player into the offense: On the first play, quarterback Matthew Stafford completed a pass to Beckham.

The Rams lost that game, but Beckham went on to catch five touchdown passes in eight games. During the 23-20 Super Bowl LVI victory over the Cincinnati Bengals, Beckham caught a touchdown pass and had a 35-yard reception before he suffered a torn anterior cruciate ligament.

Beckham, who turns 30 in November, is not expected to be ready to play for any team until late October or November at the earliest. And the Rams almost certainly will be challenged for his services by other suitors, especially playoff contenders.