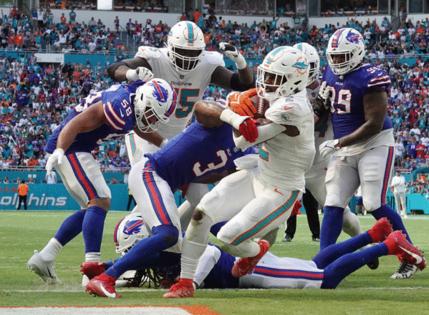 Nobody wanted to leave after this one. Getting the postgame party started could wait. First, Miami Dolphins fans wanted to stay after the final whistle, and cheer, and show love to their team — the one that has so often let them down lately but is lifting them now.

The Dolphins have hosted exactly one playoff game in the past 20 years and it was a long while and six head coaches ago, on January 4, 2009.

South Florida got the next best thing on Sunday at Hard Rock Stadium.

A game with a playoff atmosphere. With big stakes and an altogether different feel than usual as the Buffalo Bills visited in an early-season duel of unbeaten teams for the AFC East lead.

Tailgating fans began arriving at 7:30 a.m. — 2 1/2 hours before gates even opened and 5 1/2 hours before kickoff. Fans were standing in the lower bowl throughout most of the game, not typical. Thousands were wearing Bills dark blue, but “Let’s go Dolphins!” chants overwhelmed in the sold-out crowd of 66,206 — second largest crowd since a redesign lowered capacity in 2015.

The crowd was loud, festive, dialed in.

The playoff atmosphere even had this:

The right ending, at least based on the rollicking party that eventually spilled from the stadium into the parking lots afterward.

Take a picture and store it in your phone for proof in case it doesn’t last.