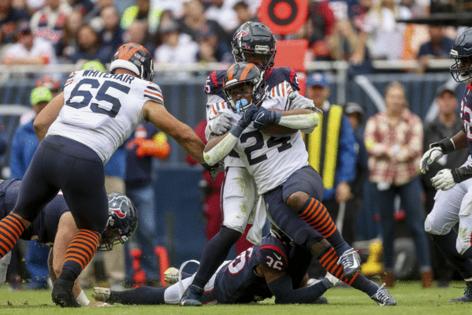 Khalil Herbert stood at his Soldier Field locker about a half-hour after the Chicago Bears squeaked out a 23-20 win over the Houston Texans and gave a one-word answer for how he felt.

But sore in the best way.

The second-year running back rushed for a career-high 157 yards and two touchdowns on 20 carries as the Bears piled up 281 yards on the ground. It was their best rushing performance since 1984, according to the team, and a much-needed lift for the offense as the passing game continues to struggle under quarterback Justin Fields.

Herbert spent the first two games as the second option to running back David Montgomery and totaled 13 carries for 83 yards. But on the Bears’ second drive, Montgomery’s right leg was caught awkwardly under a Texans defender, and he was out the remainder of the game with what the Bears announced as knee and ankle injuries.

On the next play, he rushed for 8 yards. Two plays later, he broke for 11. And one play after that, he scored a touchdown on an 11-yard run, breaking to the left sideline before popping back in through a hole to speed to the end zone for a 10-0 lead in the first quarter.

“What he did is special,” Bears right guard Lucas Patrick said. “Any back to run for that is special, but then to step up when one of our offensive leaders goes down, and to do that and say, ‘Don’t worry, I got us,’ it invigorates all of us. It inspires all of us to keep going, keep pushing.

Bears coach Matt Eberflus said the news is positive on Montgomery, whom he called “day to day.” Herbert and Fields said they talked to or texted with Montgomery and the running back was doing well.