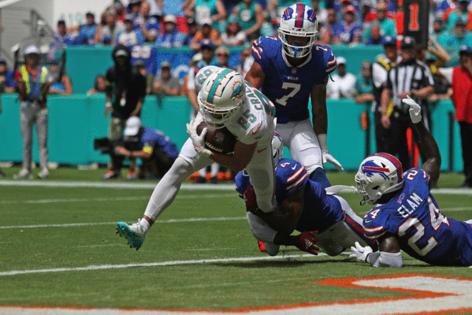 The Dolphins were outgained by a wide margin statistically on offense, but their defense made the necessary plays to secure one of their biggest victories in years, securing a 21-19 triumph over Buffalo in front of an announced attendance of 66,206 - the second-largest crowd since Hard Rock Stadium was modernized in 2015.

The Dolphins’ defense held the Bills from scoring with a goal line stand with 1:46 remaining.

And then, Miami had to overcome one of the most bizarre plays in recent memory when punter Thomas Morstead - kicking from the back of his own end zone - appeared to punt the ball off the backside of upback Trent Sherfield. On the play, which was immediately dubbed “The Butt Punt” on social media, the ball sailed straight up and backwards through the end zone for a safety.

The setback gave Miami a free kick however and Morstead kicked it deep forcing the Bills to start from their own 23 with no timeouts and 1:15 left.

Josh Allen, who completed 42 of 63 for 400 yards and two touchdowns, drove the Bills as far as Miami’s 41 on a completion to Isaiah McKenzie before they ran out of time and were unable to spike to ball to perhaps attempt a long game-winning field goal.

The Dolphins beat Buffalo for the first time since Dec. 2, 2018, ending a seven-game losing streak in the series.

The Dolphins prevailed despite being outgained 497-212 in total yards.