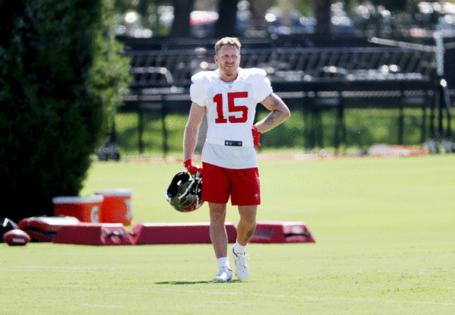 Beasley, 33, was moved up with veteran guard John Molchon, who has spent the majority of the past two seasons on Tampa Bay’s practice squad. Realistically, Beasley could provide a handful of quality reps for a unit that will be without Mike Evans (one-game suspension) and Chris Godwin (hamstring), and could be missing Julio Jones (knee).

“(Beasley’s) quick, catches up to speed (really) fast, he understands the system,” Bowles added. “He’s played and he’s got a lot of reps under him, so if we needed him I think he’ll be ready.”

Since entering the NFL as an undrafted free agent in 2012, Beasley leads all undrafted players in receptions (550), while ranking third in receiving yards (5,709) and fifth in touchdown catches (34).

He had 82 catches for 693 yards and a touchdown for the Bills last season before being released in March.

An effective performance Sunday wouldn’t quite be unprecedented. Decimated by injuries in their secondary last season, the Bucs signed three-time All-Pro cornerback Richard Sherman on Sept. 29. He started four days later at New England, tallying seven tackles in a 19-17 victory, and ultimately played three games in a 12-day span before being sidelined by a hamstring injury.