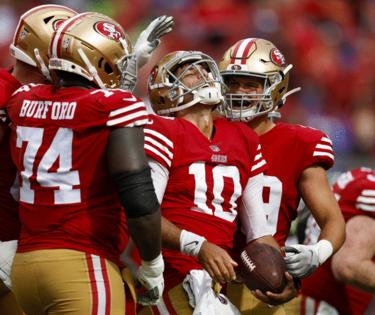 LOS ANGELES — Jimmy Garoppolo is the NFL's most photogenic quarterback this side of Tom Brady. But for at least the last couple seasons, when they looked at Garoppolo, the San Francisco 49ers only saw the photo negative.

Their focus wasn't what Garoppolo could do, but what he couldn't.

He doesn't have a Juggs machine for a right arm, and his passes don't leave vapor trails. He'd prefer to blend into the background as opposed to being a commanding voice. His running ability doesn't scare defenses. In Super Bowl LIV against Kansas City, as Patrick Mahomes began to take control, Garoppolo seemed to shrink.

The 49ers responded in 2021 by trading three first-round draft picks to move up and take North Dakota State quarterback Trey Lance third overall. The team was determined to move on from Garoppolo, but was unsuccessful in attempts to trade him this offseason.

Situations can flip quickly in football, though, and there has been a dramatic reversal with the 49ers. After Lance suffered a season-ending broken ankle in the first quarter last Sunday against Seattle, Garoppolo — with almost no preparation — stepped in and helped guide San Francisco to a 27-7 victory.

Instead of relying on Brock Purdy, a rookie seventh-round pick, the 49ers have a quarterback who is 31-14 as a starter for them and helped them reach the Super Bowl following the 2019 season and the NFC Championship game last season.

Considering he had shoulder surgery in March, didn't have spring ball, and threw on his own on a side field apart from the rest of the team in training camp, it's remarkable that Garoppolo could make such a seamless transition back onto the field.

Niners coach Kyle Shanahan downplayed the notion that the playbook was dramatically changed for the more mobile Lance, even though it looked strange to many to see Garoppolo hanging on to the ball on those read-option runs.

"We put all the same stuff in last year too, so it's not as big of a difference as people think," the coach said this week. "You're running really the exact same runs. Just do you want to get in pistol and read someone, or do you want to hand it off and not read them? It doesn't change as much as people think."

It's early, but the pieces are in place for Garoppolo to salvage the season for the 49ers, who have prime-time games the next two weeks. They are at Denver on Sunday night and play host to the Rams on Monday night in Week 4.