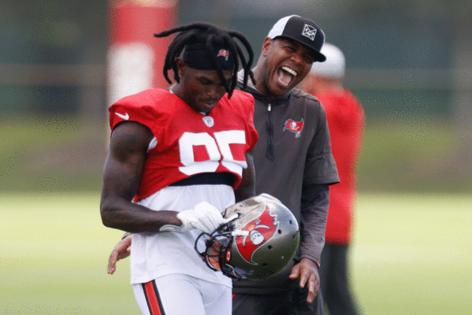 Stands to reason when you’re the NFL equivalent of Aerosmith: a spry spectacle with tons of tread, but still capable of delivering a command performance.

“We’ve been hit with injuries left and right,” 32-year-old inside linebacker Lavonte David said. “Last year we were hit hard with injuries, and we were able to overcome it.”

Yet at some point, recovery periods extend and returns diminish, even for the elite players. In their relentless quest for a second Super Bowl in three seasons, the Bucs have surrounded 45-year-old Tom Brady with grizzled talent instead of green potential; guys Brady doesn’t have to break in but are more likely to break down.

Now, a glaring question looms: Can such a seasoned roster make it through an entire season?

“I wouldn’t say all veterans are hurt,” head coach Todd Bowles said earlier this week. “There are some young guys that are hurt, too.”

Two veteran backups — 31-year-old tackle Josh Wells and 30-year-old Giovani Bernard — were placed on injured reserve earlier this week. Leonard Fournette, technically 27 but closer to 37 in workhorse years, is nursing a tweaked hamstring after collecting the fourth-most touches (49) of any NFL running back to this point.

Left tackle Donovan Smith, nine months shy of his 30th birthday, may try to grimace his way through Sunday’s game against the Packers with a hyperextended elbow. And the guy who skewers the average-age quotient more than any other — Brady — has a banged-up ring finger on his throwing hand.