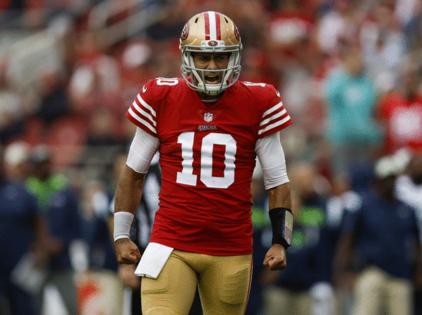 “He actually had a nice catch radius, man. He was a high school receiver,” Garoppolo said, in a complimentary way. “I got his whole story. We spent a lot of time together.”

Instead, a bizarre spectacle ensued daily at camp on the 49ers’ side field — the one with artificial turf, a Navy SEALs obstacle course, a field-goal post, and, throughout August, a former Super Bowl quarterback toiling away between jobs.

Sunday night, Garoppolo will be passing to All-Pro stud Deebo Samuel, to tight end George Kittle in his probable season debut, and to other NFL-caliber targets, all against the host Denver Broncos on NBC’s “Sunday Night Football” global stage.

“It takes a couple of days, then you’re back to normal,” Garoppolo said of his chemistry with those receivers, including newcomers Ray-Ray McCloud and Danny Gray.

Garoppolo got thrust back into his former starting role once Trey Lance broke his right ankle in the first quarter of Sunday’s home-opening, 27-7 win over the Seattle Seahawks.

What got Garoppolo ready for this? Well, a lot, starting with March 8 shoulder surgery that threw his career into limbo. Upon reporting to camp two months ago, with everyone expecting him to eventually join another team, Garoppolo was allowed in to throw on a side field.

Teammates didn’t ignore him, and, if time allowed, some happily would chat him up, as kicker Robbie Gould often did.

“Everyone understood what the scenario was,” Gould said. “As far as that’s concerned, there was really no need to talk about what was going on. It was more me being me, and busting his chops about whether it’s rehab or throwing to a trainer.

“It was awesome to see how hard he worked,” Gould added. “For me, it was cool to see how he prepared to throw every throw and stay in it.”

The 49ers’ receivers, of course, were busy with team practices, so Garoppolo would do one-on-one sessions with Bustos, who got promoted this spring to an administrative assistant role to help with “special projects.”

Media cameras were banned, at the time, from recording Garoppolo’s month-long exile on that side field. Under the supervision of Ryan Donahue, the 49ers’ “director of reconditioning,” Garoppolo would position Bustos at certain spots on the field and fire passes with NFL-level velocity.

“I’d been rehabbing in L.A., throwing. I’d been going for a pretty good while before that,” Garoppolo said. “It was really more about, and I really couldn’t get this until I got with the guys, but getting the timing with the receivers.”

Since reworking his contract to make the initial 53-man roster — his salary dropped from $24 million to $6.5 million, with incentives that could/should boost it as much as $15 million — Garoppolo’s been in catch-up mode at practice, all due respect to his side-field stint.

“You can throw spot routes all day. It’s different than a 4.4 (speed) receiver coming across the field. You know what I’m saying?” Garoppolo said. “That was the hard part with Cam. I’d be like, ‘Try running this one.’ The effort was good, though.”

Garoppolo’s own efforts did not go unnoticed, whether it was coach Kyle Shanahan and general manager John Lynch watching from their office windows or teammates admiring through loyalty-inspired lenses.

“Jimmy’s got such an awesome head on his shoulders. A lot of people would have handled that situation way different,” Gould said. “From Jimmy’s perspective, that’s just who he is. He knows he’ll get an opportunity at some point, and it’s a matter of when. He’s the ultimate guy of taking advantage of those opportunities, the whole way back to New England.

“Obviously don’t want anything to happen to one of your teammates like Trey, or anyone, but, for Jimmy, you’re happy he’s getting a chance to get what he deserves,” Gould said. “We’re happy to have him playing and we wish Trey a speedy recovery.”

McCloud said he “gravitated well” to Garoppolo upon first meeting him in the locker room this summer. They connected on a 16-yard completion on the play preceding Garoppolo’s touchdown pass to Ross Dwelley on Sunday.

“It starts with Kyle, where we need to be at,” McCloud said. "And Jimmy just puts it where it needs to be at.”

Added Gray, a rookie deep-threat specialist: “Jimmy, he’s a vet. He’s a star quarterback, a Super Bowl quarterback at that. I feel it does take time, dealing with my type of speed, but I feel that we’re going to pick it up quickly.”

Shanahan called it “a little overrated” to stress over how long Garoppolo would need to mesh with receivers, even though his first practice back as QB1 wasn’t until Wednesday — eight months since the NFC title game

“If they’re open, he’s usually going to hit them,” Shanahan said. “… You mainly train the guys in the offense and then they get very similar and Jimmy’s been used to all the other wideouts and those guys are fitting in just fine.”

When the Steelers played the Ravens in the 2021 regular season finale in Baltimore, it was basically a playoff game for Pittsburgh. The Steelers needed to win and get some help to earn the final playoff berth in the AFC. ...Read More

The Dolphins got a raw deal when the NFL moved up next week’s game at Buffalo. Having the game moved to Saturday night certainly won’t help Miami’s preparation or health/recovery. It also doesn’t help that the NFL ...Read More

Bills 24, Patriots 10: The gap between James Cook and Devin Singletary has narrowed. In the last three games, the rookie has ...Read More

Ravens quarterback Lamar Jackson was absent from practice Wednesday and Thursday, and he probably won’t participate Friday either. He’s expected to miss a game and possibly two — or three — because of his injured ...Read More

ALLEN PARK, Mich. — You know when the light turns yellow as you're nearing a high-speed intersection? In that moment, you're faced with a decision: You can hit the brakes or stay on the gas (maybe even giving it a little...Read More