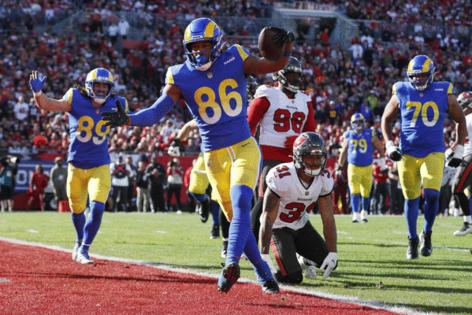 A day after signing edge rusher Takkarist McKinley, the Rams signed tight end Kendall Blanton and defensive back Shaun Jolly to the roster and veteran running back Malcolm Brown to the practice squad.

“Just excited to be back in this culture, this organization that I had been in for so long,” Brown said. “Excitement is the only word.”

The Rams suffered a rash of injuries before and during their 31-27 victory over the Atlanta Falcons last Sunday.

The Rams signed McKinley off the Tennessee Titans practice squad, reuniting the former first-round draft pick from UCLA with defensive coordinator Raheem Morris, who coached him with the Atlanta Falcons.

In 2017, the Falcons selected McKinley 26th overall in the draft. The Falcons declined to exercise their fifth-year option, however, after McKinley generated 161/2 sacks in his first three seasons. In his final season with the Falcons, he had one sack in four games before he was released at midseason.

McKinley, 26, played last season for the Cleveland Browns, and had 21/2 sacks in 11 games before suffering an Achilles injury.