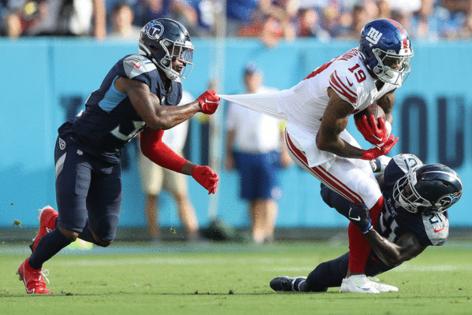 “I’ve been in the NFL a long time, as you guys have,” Daboll said before practice. “I don’t know if I’ve ever been a part of any team where someone’s not happy about something. I have a greater respect for Kenny. I’m glad he’s [un]happy that he didn’t play. It shows competitiveness. But he’s been a pro and we’ll see how it goes this week.”

Golladay was diligent as usual during Thursday’s practice. Then he watched film of his routes on an iPad in the locker room after.

Daboll and offensive coordinator Mike Kafka provided no clarity about why Golladay played only two snaps against the Carolina Panthers in Week 2, however.

“He’s done everything we’ve asked to be honest with you,” Kafka said. “He’s done a great job.”

Daboll insisted Golladay is not in the dark.

Kafka said he thinks he’s “in a good place with being on the same page” with Golladay.

“I got faith in Kenny,” Daboll said. “I got a good relationship with him. I’m sure for a player that’s 28 [years old], that’s not always the easiest thing. ... I think it’s a bigger thing than it really it is. We went with [David] Sills. KG’s working hard. We’ll see where it goes this week, and I have confidence in all the guys.”