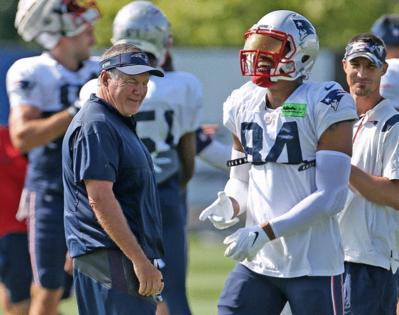 While the Patriots defense has held up its end, the offensive output clearly has to improve if the Pats want to stay in the hunt for a playoff spot.

Obviously, quarterback Mac Jones has to play better, and the tight ends need to be more involved, but there’s one other area that’s screaming for improvement.

Specifically, the Patriots need more from wide receivers DeVante Parker and Kendrick Bourne. Neither has been utilized to the fullest extent, or in one case, employed hardly at all.

To this point, they can be classified as a pair of untapped assets.

Even with Jakobi Meyers firmly established as Jones’ go-to-guy, and Nelson Agholor providing some splash on the outside, the Patriots need to squeeze more out of one or both of these receivers.

Over the course of the first two games, he’s been on the field for a majority of the offensive snaps. And produced next to nothing.

He’s had just one catch for nine yards on four targets. Lil’ Jordan Humphrey has as many catches. Making matters worse, two of Parker’s targets have resulted in Jones’ interceptions.

TAMPA, Fla. ― Tom Brady was busy Thursday shaking off an injury to the ring finger on his right throwing hand. And shaking. And shaking.

Over and over again during the portion of practice open to the media, Brady would ...Read More

FRISCO, Texas — It’s never been a secret that owner Jerry Jones likes drama, the more the better when it comes to selling his Dallas Cowboys.

So it comes as no surprise that Jones is already salivating at the thought ...Read More