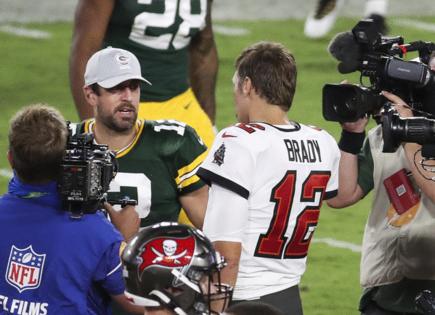 Their chase of perfection is really trying their patience.

Both the Bucs and the Packers head into Sunday’s game at Raymond James Stadium trying to play the best they can with receivers who are injured or inexperienced.

Brady will have to find a way to win without wide receiver Mike Evans, who was suspended one game for his altercation with Saints cornerback Marshon Lattimore in last week’s 20-10 win over the Saints. In addition, receivers Julio Jones (knee) and Chris Godwin (hamstring) haven’t practiced all week and seem likely to miss their second straight game.

The Bucs also lead the NFL in dropped passes, and Brady’s frustration boiled over against the Saints, leading to a melee that got Evans ejected and suspended.

“I can always do better as a quarterback and not let my emotions get the best of me,” Brady said. “Sometimes they do. It’s an emotional sport. It’s an emotional game. And we’re all there trying to do the best we can do. You’re right, I think there’s a frustrating part for all of us when you get a little older and you expect it a certain way and it doesn’t go exactly the way you want. But that’s the way it is, and I’ve got to do a good job as a leader to be at my best regardless of how I feel about certain situations.”

Brady broke another tablet on the sideline over the Bucs’ failure to score in the first half.

But offensive coordinator Byron Leftwich said most of Brady’s anger and frustration is with his own performance and not aimed at teammates.

“If you know him well enough, he’s really talking to himself most of the time,” Leftwich said. “We know Tom. Everything is fine. This is what he does. If things aren’t going well, that’s the good thing about having Tom on your team. If things ain’t going well, you’re going to get that reaction out of him, and it normally gets the guys going.”