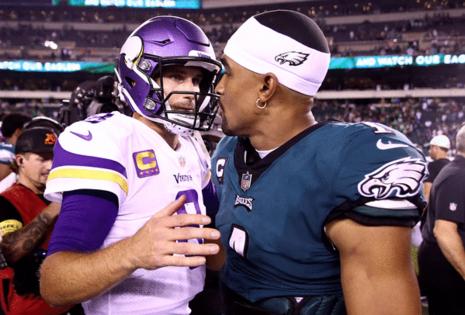 PHILADELPHIA — Vikings coach Kevin O'Connell cast Monday's game against the Eagles as something of a heat check after the team's season-opening win over the Packers. The Vikings, O'Connell said, were going to "find out a lot about where we're at, when we can travel away from our great home environment and go play in a really tough environment."

Previous Vikings coaches have seen their teams humbled at Lincoln Financial Field before. In his first loss at the head of the franchise, O'Connell became the latest to have it happen.

Monday night's 24-7 drubbing in Philadelphia stripped away the shiny veneer from Week 1's win and recast the Vikings as a team still in search of consistent answers to many of the questions that lingered about them before the season. The Eagles outgained the Vikings 347-93 in the first half, when Jalen Hurts looked sublime and Ed Donatell's defense had few answers for the quarterback whether he was throwing underneath the Vikings' zones, keeping the ball to run or firing it deep to exploit busted coverages.

In the second half, Kirk Cousins threw three interceptions: one from the Eagles' 19 to end a productive drive, one from the Philadelphia 27 after Kris Boyd returned Patrick Peterson's blocked field goal and one from the Eagles' 9, when Cousins forced a third-down fade into the end zone after Jordan Hicks picked off Hurts. Justin Jefferson appeared to apologize to Cousins after Darius Slay's first pick; James Bradberry sunk underneath Adam Thielen's route to make the second interception and Slay came down with the jump ball Cousins threw while falling away from an Eagles blitz.

Cousins completed 27 of his 46 passes for 221 yards and a touchdown to go with the three picks. Dalvin Cook ran six times for 17 yards. Jefferson, after posting 184 yards last week, caught six of his 12 targets for 48 yards against an Eagles secondary that was happy to be physical with him. Tight end Irv Smith, who caught the Vikings' lone touchdown pass, dropped a deep ball from Cousins after separating from the Eagles' coverage downfield.