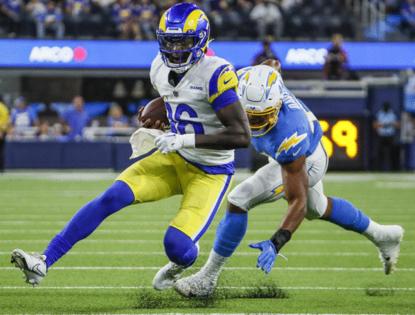 LOS ANGELES — Until this week, the only preseason drama surrounding the defending Super Bowl champion Los Angeles Rams centered on quarterback Matthew Stafford’s right elbow, and whether the 14th-year pro would be ready for the Sept. 8 opener against the Buffalo Bills at SoFi Stadium and beyond.

Based on his efficient performance during an intrasquad scrimmage this week, Stafford appears to be managing any discomfort caused by tendinitis. Like nearly every Rams starter, he will be ensconced on the SoFi Stadium sideline during Friday night’s preseason game against the Houston Texans.

But there is still quarterback intrigue, courtesy of coach Sean McVay.

After not playing back-up John Wolford during the 2021 preseason or last week against the Los Angeles Chargers, McVay said that Wolford would play the first half against the Texans, Bryce Perkins the second.

Is it simply, as McVay said, an opportunity for Wolford to take game snaps? Or a way to measure whether Perkins can unseat Wolford for the back-up role?

Five areas to watch against the Texans:

Stafford’s workload was reduced during training camp, enabling Wolford to take a lot of snaps with the first-team offense.

Against the Texans, he will be operating with reserves.

Wolford, 26, has not played extensive snaps since the 2020 season.

The Horse Bowl to kick off NFL Week 5 is not a happy rodeo. ...Read More