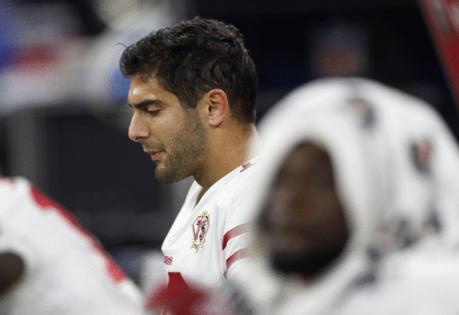 If the 49ers cannot sell the Cleveland Browns on trading for Jimmy Garoppolo now, then the Niners’ quarterback cannot be sold.

And seeing as how the Browns don’t seem to have any interest in Garoppolo as of Thursday morning, that means we’re nearing the end of the quarterback’s time in the Bay, most likely with his release before or on Aug. 30.

Garoppolo deserves some blame in the mess — his March shoulder surgery certainty didn’t help his trade value — but there’s no escaping that the 49ers have spent months actively trying to trade Garoppolo and more than a year being open to offers. They came up with nothing.

And so general manager John Lynch and head coach Kyle Shanahan waited, holding onto their former starting quarterback, hoping one of the league’s other teams would develop a late need for a player of his caliber. The Browns, who run the same offensive system as the Niners, were seen as an ideal trade partner with the Watson suspension looming.

Now that Watson’s suspension is here, one would expect talks between the Niners and Browns to heat up.

So far, there’s no smoke. I don’t expect that to change.

Perhaps the radio silence is just posturing by the Browns — an effort at leverage with the Niners — but it must be said that Cleveland expected a long suspension for Watson the moment they traded for him. That’s why he is signed to a deal worth only $1 million this season. Even with that expectation, the Browns signed Jacoby Brissett as Watson’s backup. They knew they’d need a fill-in starting quarterback — perhaps for the whole season — and they chose Brissett. There’s a commitment there — one that paired with Brissett’s performance in training camp appears to supersede trading any assets for Garoppolo, not to mention taking any of the $25.55 million the Niners still owe Garoppolo for this season.

It must be stated that Garoppolo is a better quarterback than Brissett and that Cleveland has the salary cap space to trade for Garoppolo. But the Browns cannot be held up as rational actors.

All eyes will be on quarterback Teddy Bridgewater when the Dolphins visit the New York Jets this Sunday.

But the focus should be elsewhere.

The focus should be on getting the running game going.

LOS ANGELES — Rams linebacker Bobby Wagner said he was just trying to help when he tackled a man who ran onto the field with a smoke bomb during a “Monday Night Football” game against the San Francisco 49ers at Levi�...Read More