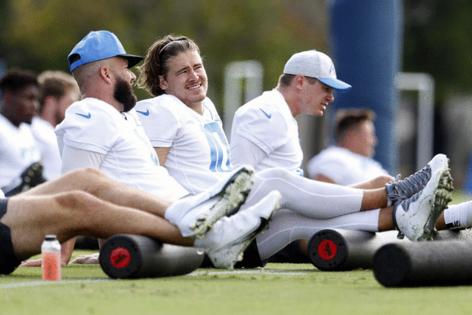 LOS ANGELES — It is a routine that's anything but routine, Justin Herbert hanging around after most of his teammates have left the practice field to throw more passes.

The longest tenured of all the Chargers, Allen was asked about Herbert's predecessor with the team, Philip Rivers.

Entering his third season and coming off his first Pro Bowl selection, Herbert explained that he likes to put in extra work on any throws that didn't feel quite right in practice.

He said the drills often are more about things like ball placement and stepping forward in the pocket and delivering a strike rather than how tightly the ball is spiraling.

"I think it's just based on whatever happened that day," he said. "If there are a couple throws during practice that maybe I missed or maybe I felt could have been better, after practice is the time to address those.

"I can get as mad or as happy after practice as I want. But, during practice, I need to be level-headed and focused. You can't let the last play affect your next one. So that's kind of the purpose of [doing] that after practice."

The exercise is not unlike a golfer going to the range following a round to work on a certain shot or a specific club.

Right now, the unit is a revolving door, even though it seemed to find some rhythm in ...Read More

CINCINNATI -- Quarterback Tua Tagovailoa was taken off the field on a stretcher and the Dolphins’ 3-0 start to the 2022 NFL season came to an end in a 27-15 loss to the Cincinnati Bengals at Paycor Stadium on Thursday ...Read More

CINCINNATI — Miami Dolphins quarterback Tua Tagovailoa was taken off the field in a stretcher in the second quarter of his team’s Thursday night game at the Cincinnati Bengals at Paycor Stadium.

The cloudiness around Herbert's status was so pronounced that — even ...Read More

LOS ANGELES — Matthew Stafford will not go into a "Monday Night Football" matchup against the San Francisco 49ers riding an obvious wave of production.

The Rams quarterback did not throw a touchdown pass in last Sunday'...Read More

CINCINNATI — Dolphins quarterback Tua Tagovailoa was taken off the field on a stretcher after sustaining an injury in the second quarter of Thursday night’s game against the Cincinnati Bengals at Paycor Stadium.