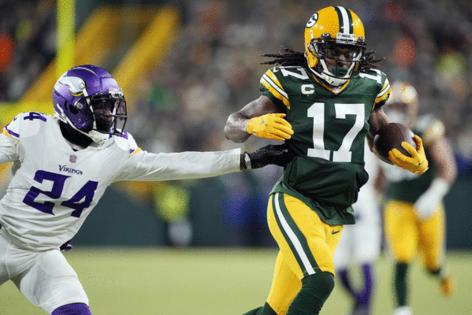 MIAMI GARDENS, Fla. — As Mackensie Alexander absorbed the South Florida heat and humidity for a third training camp practice with the Miami Dolphins this week, he was reminded on Thursday of the hard work he had to endure both working with his parents in his youth and as a high school football standout in Immokalee in similar conditions.

Alexander and his twin brother, Mackenro, gathered everything from oranges to tomatoes on the fields of the rural Florida town just southeast of Fort Myers for his working-class parents, who were Haitian immigrants. It was commonplace for Alexander to have to wake up at 4 or 5 a.m. to spend the morning on the fields before getting ready for school.

It motivated him to see football as a way out of that lifestyle, and he made the most of his opportunities at Immokalee High, becoming a five-star recruit that played for Clemson and eventually became a second-round pick of the Minnesota Vikings in the 2016 NFL draft.

Spending five of his six seasons with the Vikings and 2020 with the Cincinnati Bengals, Alexander was available as a free agent this week when the Dolphins needed a cornerback following Trill Williams’ placement on season-ending injured reserve. Already living in South Florida in the offseason, the situation lined up perfectly for Alexander to sign with the Dolphins.

“It’s an amazing opportunity. I love it,” he said, sweating profusely as he spoke with reporters following Thursday’s drills. “I’m back home. I’m excited. My family’s excited. My friends are excited. I’m like an hour away from home, so this is amazing. I’m happy. I’m enjoying this.”

Alexander is back in the region where he first made his mark as a football recruit. He was rated the 2013 class’ No. 4 cornerback prospect, according to the 247 Sports composite rankings, at Immokalee.

“In South Florida, it’s talent,” said Alexander, who recalls covering NFL wideout Sammy Watkins at South Fort Myers High before they became Clemson teammates for a year. “You’re going against top guys in the league. I went against a bunch of receivers that went to D-I ball or, a lot of them, that are in the league right now.”

Playing in South Florida, Alexander had two of his greatest team achievements of his career, one in high school and one in college. Both involved his teams reaching a championship game. His Clemson Tigers defeated Oklahoma in the 2015 season’s Orange Bowl, a College Football Playoff semifinal at Hard Rock Stadium before falling to Alabama in the title game. In 2012, his Immokalee team topped Miami Jackson at historic Miami-Dade County high school football venue Traz Powell Stadium in the Class 5A state semifinal before losing to Tallahassee Godby in the championship game.

“Jackson had a lot of good receivers that year too,” Alexander said, reminiscing. “I remember that, for sure. It was a shootout. It was a crazy game.”

The Dolphins were the hometown team for Alexander growing up, and he remembers watching a little bit of the cornerback combination of Sam Madison and Patrick Surtain in the early 2000s. Madison and Surtain are now assistant coaches on Miami’s staff.