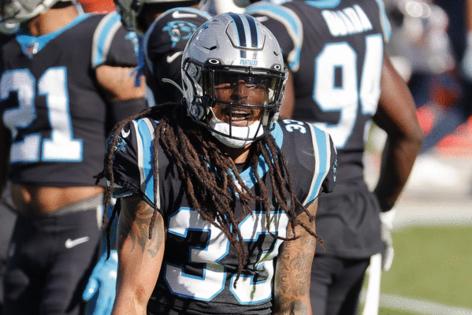 Tre Boston was always one of the most loquacious players in the Carolina Panthers locker room and, before that, with North Carolina. Now the former NFL and Tar Heel standout will get paid to talk on TV, as Boston becomes a co-host on the new, football-centric show “ACC PM” on ACC Network.

Only 30, Boston is barely out of the NFL after playing 104 games and starting 76 in seven pro seasons, with 48 of those starts coming with the Panthers as a free safety.

Those NFL games took about three hours to play, and three hours is still going to be the magic number in Boston’s workday. But now that time will come at the home of the show’s host Mark Packer, who will helm ACC PM from the TV studio in the basement of his Charlotte home.

ACC PM starts Monday on ACC Network and will run weekdays from 4-7 p.m., with occasional road trips to conference campuses for big Saturday football games. The show’s primary focus will be on football, even in the offseason, but there will also be freedom to talk about every sport in the conference. Sportscaster Taylor Tannebaum has also signed on as a co-host, and both she and Boston will meet Packer in the basement every day for a three-hour tour through the ACC.

“I’m made for this job,” Boston said. “I love it. My biggest thing is, I want to continue to be informed, to bring energy and to have fun. I want people to see my energy through the screen.”

Boston isn’t completely new to talking about football on TV or radio, a venture that former star Panthers like Steve Smith, Greg Olsen, Jake Delhomme, Jordan Gross and Thomas Davis have all explored as a post-football career. Boston dabbled in local television and radio last year in Charlotte and made occasional appearances on NFL Network. He never lacked for opinions as a player, and remains outspoken about a number of topics.

“Tre has a personality that brings a smile to your face and resonates through the screen,” said Aaron Katzman, ACC Network’s coordinating producer. “He’s very likable. He’s high energy, a ton of fun… And that ACC and NFL pedigree brings with it a respectability factor.”

In our interview, Boston talked about Cam Newton, his prediction for the 2022 ACC championship football game, and whether he would ever consider un-retiring from football after playing his last NFL game in 2020.

Here are Boston’s thoughts, slightly edited for clarity and brevity, on:

— Why Newton, Boston’s former teammate with the Panthers doesn’t have a job: “I believe that people believe a lot comes with Cam Newton…. I always see him compared to players like (New York Jets backup QB) Joe Flacco. Joe Flacco is a quarterback who, I believe, Cam is better than. But at the same time Joe Flacco doesn’t come up with everything that Cam has to offer…. Sometimes organizations, they don’t want to deal with what they would call outside noise.

“It almost reminds me of Russell Westbrook. He’s one of the best players who will ever come through the NBA. He’s talked about now like he is just a bum. You see the same thing for Cam — one of the best players who has ever worn the NFL shield. But on the way out, he gets a little disrespect. So it’s unfortunate. I pray that Cam hops on with a team and is able to prove his worth.”

— Who will be in the ACC title game in Charlotte on Dec. 3: “Sam Hartman going down for Wake Forest shakes up the Atlantic a little bit. I believe that Clemson gets back to being a perennial power… Miami has a lot of upside, and I would like to see Clemson and Miami in the championship. And then Clemson can just go ahead and take it, and get back into the playoffs.”

— What sort of record the Panthers will have in 2022: “Obviously the team goes as the quarterback goes, and Baker Mayfield must be the guy for us. He has the weapons around him for it. The defense has to show up…. I think this team is fighting for that wildcard spot…. We all know without Christian McCaffrey, we are nothing. It’s unfortunate, but that’s just the name of the game. He’s that good of a player…. I don’t know what the record will be. But I will put the over-under at 7 wins.”

— Whether he would consider playing in the NFL again: “I would say truly that I never really retired… God blessed me to be able to play NFL football longer than I played in high school and college combined… I’m signed with the ACC Network and I’m definitely committed to my group and my team. But at the same time, you know, Eric Weddle (a safety who, after retiring, briefly signed with the Los Angeles Rams late last season, played in the playoffs and won a Super Bowl ring). I might pop on and and win a Super Bowl for a week or two weeks and, next thing you know, get right back to retirement. You just never know. I’m pretty sure if the Panthers needed me and they were deep in the playoffs, they’d know exactly who to come to.

“But for me, I would say I am definitely comfortable where I’m at. I want to turn over a leaf and be ready for the ‘after-football’ life. It’s the guys who cling to football as their purpose who get stuck in it.”