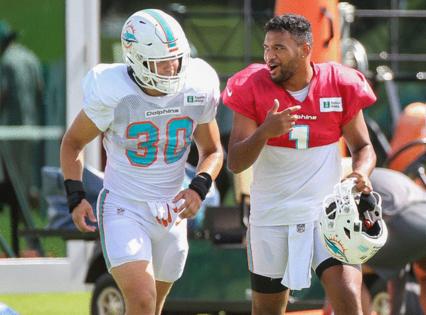 But five interceptions over two practices this week may have him go the other way ahead of Saturday night’s exhibition against the Las Vegas Raiders at Hard Rock Stadium.

As far as Tagovailoa goes, he wants to get into the preseason action. The Raiders game would seem to make more sense than the preseason finale against the Philadelphia Eagles the week that follows, as the final preseason game is usually one for starters to rest and an opportunity for those on the border of making the final cut, as well as roster longshots earning reps to put on tape.

“I always want to play,” Tagovailoa said following Wednesday’s practice. “I wanted to play last week, too — at least a couple of snaps — but Mike decided that then wasn’t the time. Hopefully, he gives the first offense an opportunity to go out there, hopefully get some plays in, understand some situations knowing how to manage the game and kind of get back into the groove of things.”

McDaniel, speaking with the media for the final time before Saturday’s exhibition, remained noncommittal on playing time decisions for veterans and starters on Wednesday. Players not expected to play will be announced by the team 90 minutes prior to the 7 p.m. kickoff on Saturday.

Neither Tagovailoa nor McDaniel viewed the turnover-heavy stretch as much of a negative for the offense in Wednesday comments. McDaniel, speaking ahead of Wednesday drills wasn’t down on his quarterbacks after six interceptions were thrown at Tuesday’s practice — three from Tagovailoa.

McDaniel said he was pleased with the offense in early portions of practice and was actually letting his defense hear it until the unit turned it around with interceptions from Jevon Holland, Brandon Jones, Nik Needham, Noah Igbinoghene, Elijah Campbell and Quincy Wilson.

“[Tuesday] was the classic example of the conflict, at least for me emotionally as a head coach — and I was very clear with this with the team — I was very pumped with how the offense and, in particular, Tua came out and practiced. And I let it be known early and often to the defense that I didn’t think that they were performing to the standard,” McDaniel said.

McDaniel noted the team’s offensive red-zone success during that portion of practice early Tuesday. Two of Tagovailoa’s interceptions came in late-game scenarios where he had to push the ball downfield in a hurry.

“After kind of bringing that to the defense’s attention, we got into some situational periods, and man, did they answer the bell,” McDaniel said. “In those periods, we turned the ball over way too much, which was a great learning lesson for Tua. We hadn’t been in a couple of those situations yet, and so we got to talk about it and learn from it.

Tagovailoa didn’t find Tyreek Hill on Tuesday as often as he did in other practices throughout training camp, specifically in a successful stretch leading up to him not playing the preseason opener at Tampa Bay last Saturday. Tagovailoa also had fellow dynamic wideout Jaylen Waddle miss practice Tuesday and Wednesday in what McDaniel called a “preventative” measure for a minor undisclosed injury.

On Wednesday, Tagovailoa found Hill immediately for a chunk play over the middle off play-action to start the 11-on-11 period. Tagovailoa, however, later was intercepted twice more by Holland, once in the end zone looking for tight end Durham Smythe and again eyeing receiver Preston Williams into heavy traffic over the middle.

“For me, trying to read off my read keys, he’s made tremendous plays, not just today but throughout the entire camp,” said Tagovailoa, who views the mistakes in practice as a valuable experience heading into a key third season. “The plays that he’s made is only getting me better, only getting our route distribution better and our timing better offensively.”