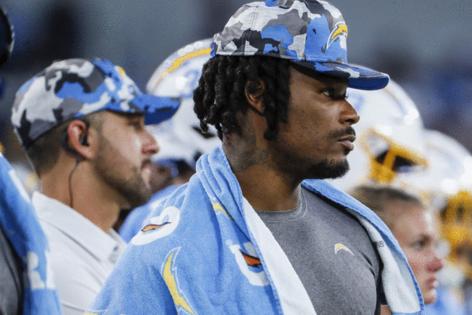 LOS ANGELES — The Chargers resolved the biggest issue hanging over their training camp, agreeing to terms on a contract extension for star safety Derwin James Jr.

James will receive four years and up to $76.5 million — $42 million of which is guaranteed —making him the NFL's highest-paid at his position.

James has been with the Chargers, participating in meetings and walkthroughs but has not been practicing.

Entering his fifth season, James was set to make slightly more than $9 million on the option of his rookie deal.

He's coming off a season in which he made his second Pro Bowl and established himself as the key piece of coach Brandon Staley's defense. James is the Chargers' signal-caller and widely acknowledged leader.

James possesses the versatility to play all over the field, from lining up deep to coming off the edge as a pass rusher and nearly everything in between.

The extension market for safeties was reset in mid-June when Pittsburgh agreed with Minkah Fitzpatrick on a deal that added four years and up to $73.6 million — with $36 million guaranteed — to his rookie contract.

In the 2018 draft, Miami selected Fitzpatrick 11th overall, six spots before the Chargers picked James. The Dolphins traded Fitzpatrick to the Steelers in September 2019.

An All-Pro as a rookie, James appeared in only five games in 2019 and '20 because of injury.

He had a separated shoulder during the 2021 season but was able to remain on the field. He had surgery after the season.

He totaled 118 tackles, finishing third leaguewide among defensive backs. Fitzpatrick was first with 124.

At the opening of camp, Staley said James' shoulder was sound and that he'd be a full-go healthwise once his contract situation was settled.