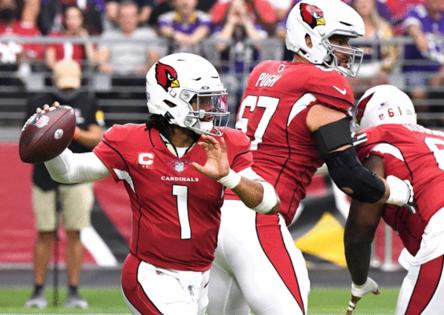 Here's your 2022 preview of the Arizona Cardinals, the fifth of 32 team profiles during draft season:

Murray (ADP: 60) has finished as fantasy's QB7, QB2 and QB10 in his three seasons since entering the NFL. He only finished 10th last season because a sprained ankle caused him to miss three games — only Josh Allen, Justin Herbert and Tom Brady averaged more points per game. Murray has legit QB1 upside and is slightly discounted compared to Allen, Herbert and Patrick Mahomes (all currently being drafted inside the top 36).

Arizona coach Kliff Kingsbury has hyped up Moore (ADP: 137) the entire offseason. With DeAndre Hopkins suspended for the first six games, Murray's former college teammate Marquise Brown will operate as WR1, but Moore will have an opportunity to gobble up all of the targets vacated by Christian Kirk and Chase Edmonds. This means Brown will be affected much more by Hopkins' eventual return than Moore.

There isn't a lot of competition here keeping Conner (ADP: 31) from being a true featured back, which isn't prevalent in the NFL these days, but his injury history tamps down any excitement. He has dealt with ankle, back, heel, quad, rib and toe injuries since 2020 alone.

Zach Ertz was fantasy's TE6 after joining the Cardinals in Week 7 last season, so McBride (ADP: 253) will have value if Ertz gets injured. Otherwise, the first tight end taken in the 2022 NFL draft (55th overall) should only be considered in dynasty leagues after a highly productive senior season at Colorado State — 1,121 yards on 90 receptions.