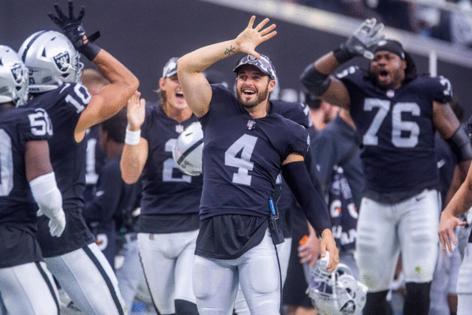 He is where he should be for now. On the sideline. Out of harm’s way.

It doesn’t mean Carr isn’t continuing to learn the new offense of coach Josh McDaniels. Doesn’t mean he can’t still pick up nuances of it.

“I think the most important thing I do during the preseason is communicating with Josh, whether I’m in the game or not,” Carr said this past week. “I feel like I can get better by asking, ‘Josh, what are you thinking on this?’ Because I want to make sure. I’m trying to execute it exactly how he wants it done.”

Aaron Rodgers couldn’t have been more correct when talking about the opportunity for a starting quarterback to play in the preseason. There is no benefit, the Packers quarterback insisted, to suit up and take one series.

Some teams agree. Many who gave starters time over the weekend don’t.

For his part, Carr’s play during camp has been exemplary.

He shouldn’t see the field until the Raiders kick things off for real against the Chargers on Sept. 11. Nothing to gain. The risk isn’t worth it as the Raiders continue to look for what bodies might comprise a competent offensive line.

Things were again rough up front at times Sunday.