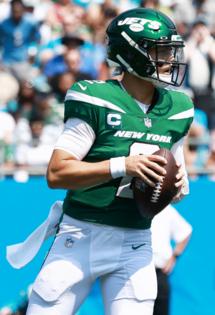 Zach Wilson traveled to Los Angeles and will undergo surgery on his knee Tuesday, according to Jets coach Robert Saleh, who is withholding declarations of a quick recovery.

The optimistic recovery timeline is 2-to-4 weeks after Wilson tore his meniscus in Friday’s preseason opener against the Eagles, the result of a hard cut on his right leg during a scramble.

Although the Jets avoided a worse-case scenario of an ACL tear, the fact that their franchise quarterback is going under the knife is discouraging. Wilson also missed games last season because of a right knee injury.

Regardless of Wilson’s status for the regular season opener against the Ravens on Sept. 11, the 23-year-old is sure to miss the remainder of training camp and preseason, including against the Giants on Aug. 28.

“It’s a setback in that he’s missing an unbelievable opportunity to get these reps in, to play against other defenses, especially the Giants who have such an elaborate pressure package system,” Saleh said. “But he’s got to stay dialed in just like last year when he was hurt, learn from his teammates and try to be involved mentally as much as he can be. The timing of it overall is terrible and it sucks but I think Zach has an opportunity to grow from it if he attacks it mentally.”

The likely scenario is Joe Flacco starting Week 1 against the Ravens, coincidentally the one he led to a Super Bowl victory in 2013.

“Obviously people are going to bring it up to me (playing your former team). And you think about that,” Flacco said. “Usually the emotions are definitely crazy. Guys try to act like they’re cool. I’ve thought about it a little bit. I’m going to make sure it’s not the biggest deal in the world, but I’ve seen guys go through it.”

Newly signed Duane Brown is the projected starter at left tackle, Saleh confirmed, meaning George Fant will move to the right side.