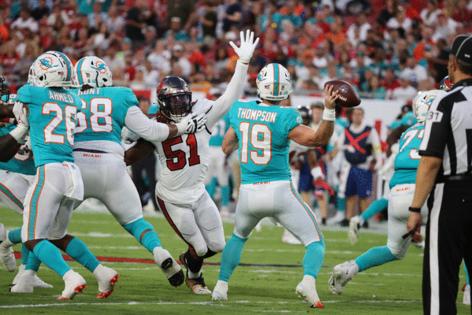 The actual starter, Tua Tagovailoa, wasn’t even a consideration to play, which is all good and fine in today’s NFL where preseason has been diminished to the point it doesn’t actually exist for many teams.

That’s why the Dolphins sat 20 players to avoid injury. Tampa Bay sat out 29 players. It’s enough to get you thinking why they play these games at all, but the last thing you want to do is think too hard about nights like this.

* Is the Dolphins’ roster thinner than expected? Case-in-point: Backup tackles Larnel Coleman and Kion Smith gave up sacks to Tampa bay backups. Also: Third-year cornerback Noah Igbinoghene didn’t show signs of improvement in giving up a touchdown and another reserve cornerback, Trill Williams, might have suffered a serious knee injury in the final minutes.

— Is kicker Jason Sanders back to 2020 form? Sanders made all four field goals Saturday, suggesting he’s left last season’s inconsistencies behind him.

— Why didn’t center Connor Williams play to acquaint himself better with his new position?

Actually, you know the answer to why Connor Williams didn’t play and it was given above regarding Trill Williams. Come September no one will think of players getting hurt in practice. But in August that’s about all every team thinks about.

That’s why Thompson wasn’t just the starting quarterback in Tampa but — if you stayed with it all the way — he was the finishing one, too. The seventh-round pick played the whole game. He protected Tagovailoa and Bridgewater more than the revamped offensive line might have this game.

Thompson played well, too, completing 20-of-28 passes for 218 yards and a touchdown.