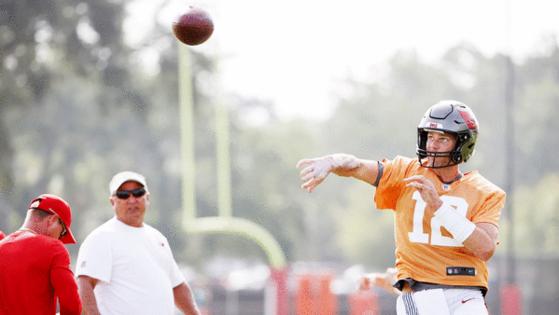 TAMPA, Fla. — Before ending his retirement and returning to the Bucs, Tom Brady knew he had to make better use of his timeouts.

His business empire now includes a clothing line (BRADY), production company, the TB12 healthy and fitness company with trainer Alex Guerrero and the NFT company, Autograph. In the offseason, he produced and starred in a film, 80 for Brady.

For a guy who has always beaten the clock, the hours and minutes that make up Brady’s day have become a precious commodity.

Brady has been excused from training camp until sometime after the Bucs’ preseason game at Tennessee on Aug. 20.

That announcement came Thursday from coach Todd Bowles when Brady was excused from his third practice in a week for what the Bucs have termed “personal reasons.”

“He’s going to deal with some personal things,” Bowles said. “This is something we talked about before training camp started. We allotted this time because he wanted to get in and get chemistry with the guys and go through two weeks of training camp. Knowing he wasn’t going to play the first two games, he didn’t want to take away reps from Blaine (Gabbert) and Kyle (Trask), as well as (Ryan Griffin), as far as going into these next two games. It’s something that he needs to handle. We trust him.”

Note that Bowles said Brady’s hiatus had been scheduled before training camp.

Here’s what we know. The scheduled absence has nothing to do with Brady’s or his family members’ health.

Brady’s mother, Galynn, is a cancer survivor. His father, Tom Sr., fought a scary battle with COVID-19 last year that led to his hospitalization. Both are fine.