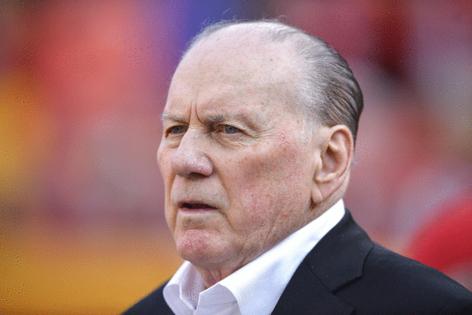 KANSAS CITY, Mo. — Legendary quarterback Len Dawson, who led the Chiefs to their first Super Bowl triumph and was with the Kansas City NFL organization for six decades as a player and broadcaster, has entered hospice care in Kansas City, a friend of the family confirmed Friday afternoon to The Kansas City Star.

Dawson, 87, became the team’s starting quarterback in 1962, the franchise’s final year in Dallas, and was the Chiefs’ primary quarterback until his retirement in 1975. With the Chiefs he was reunited with Hank Stram, who had been his assistant coach at Purdue.

Along the way, the Chiefs won three AFL championships, played in Super Bowl I and captured the Super Bowl IV title. Dawson was selected as the Super Bowl IV Most Valuable Player in the Chiefs’ victory over the Minnesota Vikings. He’s still the franchise leader in touchdown passes and passing yards.

Even before his playing days were over, Dawson started talking about football on television. In 1966, he went to work at KMBC-TV as the station’s first sports anchor.

In 1978, Dawson joined the cast of HBO”s groundbreaking “Inside the NFL” show and served as co-host for 24 years. He worked for six years as an analyst on NBC game broadcasts. Dawson also worked in the Chiefs’ radio booth as an analyst from 1984-2017.

Dawson was elected to the Pro Football Hall of Fame in 1987, and in 2012 he won the Hall of Fame’s Pete Rozelle Radio-Television Award.

“Looking back on my career, I’ve been blessed for what I had the opportunity to do,” Dawson said in 2017.

As Dawson prepared for his final year in the radio booth, Chiefs chairman and CEO Clark Hunt, son of team founder Lamar Hunt, said, “Next to my father, few people have had a more lasting impact on the Kansas City Chiefs than Len Dawson.”

Vahe Gregorian contributed to this story.