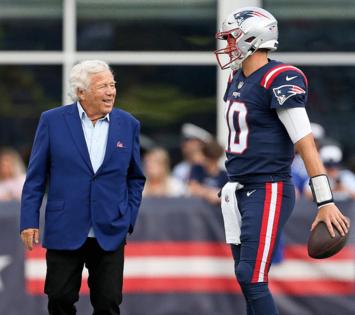 Talk about taking the bite out of the first preseason game. The Patriots fielded mostly rookies and backups against the Giants on Thursday, giving fans a healthy dose of unknown quarterback Bailey Zappe and wide receiver Tyquan Thornton.

Granted, the starters don’t tend to see much time in the exhibition opener. But given how poorly the offense has looked in general, sending Jones and the starting unit out for a series or two might not have been the worst thing.

Judging how their offense looked the past few weeks, they need all the reps they can get to sort out all the issues that have plagued the unit since the start of training camp. A few reps, if only to help get the system down with the communication between Jones and the play-caller Matt Patricia, who appeared to be calling the plays early on — although Joe Judge seemed to take over in the second quarter — might have been worthwhile.

It’s possible he didn’t think the offense was ready for game action against an actual opponent. Maybe he saw danger in putting Jones out there with an offensive line that hasn’t quite grasped the new scheme. Maybe he thought more harm than good would come of it, given how slowly the transition is taking to not only install a new offense, but grasp it with some measure of confidence.

So on some levels, that makes sense.

But that explanation, in itself, gives reason for pause and concern about the state of Jones and the Patriots offense. It lends to more criticism and scrutiny about dumping the old complicated offense — which Jones mastered — in favor of a completely new scheme; one with simpler language and dynamics, to help the players and the coaches who are installing an offense for the first time. Yes, that means Patricia, the offensive line coach and de facto coordinator, and quarterbacks coach Joe Judge.

It’s not the best look having the replacements for Josh McDaniels also learning what they’re teaching, not to mention moving to a different scheme to bail out coaches who couldn’t coach the old scheme. Because that’s how it seems.

But let’s cut to the chase.