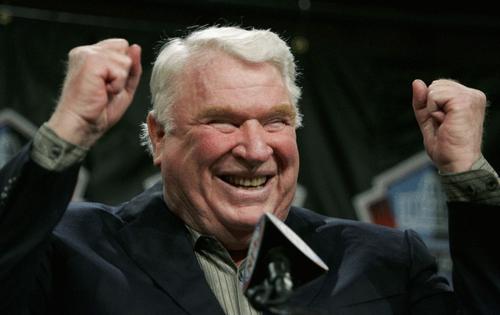 The National Airlines ticket from Nov. 25, 1979, is part of a multi-item Madden lot that is up for bid on Heritage Auctions.

Madden took the flight from Tampa, Fla., to Houston, where he was supposed to continue on to San Francisco, according the auction description. He instead skipped that flight and traveled the remaining 2,000 miles to the Bay Area via ground transportation.

The flight cost Madden $700, but those looking to bid on the ticket will have to fork over much more than that.

Heritage has the listed starting bid at $5,000, with a buyer’s premium of $6,000. The envelope and baggage tags are included with the ticket. The estimated value of the ticket is at least $20,000, according to Heritage.

Eventually Madden, who died late last year, began traveling the country for his television responsibilities in his Madden Cruiser luxury bus, logging tens of thousands of miles per year.

The former Raiders Super Bowl winning head coach, television broadcaster and Pro Football Hall of Famer developed his disdain for flying after he lost several friends in the crash of a plane carrying players from California Polytechnic State University’s football team, according to the listing. He never took to the sky again.

Other Madden items are up for bid from the collection of longtime friend and colleague, former TV executive Michael Frank. They include a 1994 All-Madden team jacket previously owned and worn by the coach; a signed 1997 All-Madden Super Bowl football; 1993 All-Madden-used torch and arrows used by former Chicago Bears great Walter Payton; and a hand-written team sketch for the 1987 selections to the All-Madden team.