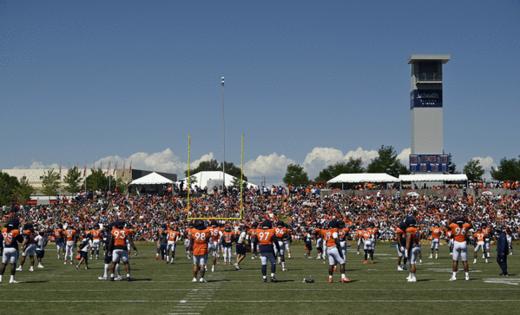 As the temperature spiked and tempers flared, with no less than a half-dozen dust-ups that sometimes led to fisticuffs, somebody should’ve hosed down these undisciplined Broncos and churlish Cowboys and sent them all to bed without dinner.

The mayhem was instigated by the Broncos. It was no accident. Chubb admitted he and teammates had talked about their practice facility being a sanctuary, where no guff from visitors would be allowed.

Sick and tired of the Broncos getting pushed around in the NFL, Chubb lowered his shoulder and knocked the Dallas star out of running back Ezekiel Elliott, then did a little dance to celebrate a hit that went beyond the norm in a controlled scrimmage where tackling to the ground is strictly verboten.

“You ain’t got to do that,” said Elliott, while crossing paths with Chubb on his way back to the Dallas huddle.

I’m not so certain the apology was entirely sincere.

From the first snap of this scrimmage at Dove Valley headquarters, where first-team offensive players squared off against their top defensive counterparts on side-by-side fields with an overflow crowd of Broncos and Cowboys fans buzzing, Chubb seemed intent on sending an ornery message:

When Dallas receiver Noah Brown caught a short pass from quarterback Dak Prescott and casually jogged the football back to place it for the next snap, Chubb walked up and knocked the pigskin from Brown’s hand.