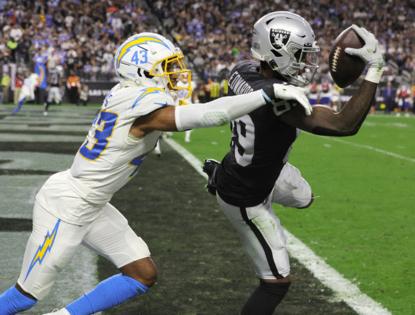 On Wednesday, in his first media session of training camp, Davis admitted that he permitted distractions to affect his play in 2021.

"I think last year for me, it was a year of distractions — on the field and off the field," he said. "So I think that came into play in my game … like inconsistency. But I think we're past that."

In his fifth season, Davis started all 14 games in which he played, finishing with 54 tackles, a team-high 12 passes knocked away and one interception.

But he also was part of a defense that too often failed to make key stops, the Chargers finishing last in the NFL on third down.

Though he didn't provide many details Wednesday, Davis indicated his issues a year ago came mostly off the field.

"It was just distraction in my personal life, like with my previous girlfriend. …" he said. "Whenever happens off the field comes onto the field and vice versa. This year, I was able to eliminate all the distractions and go back to [being] myself."

In the offseason, the Chargers signed Pro Bowl cornerback J.C. Jackson and veteran slot corner Bryce Callahan, effectively dropping Davis to No. 4 at the position, also behind Asante Samuel Jr.

Davis has started 49 of the 51 games in which he has appeared since the middle of the 2018 season.