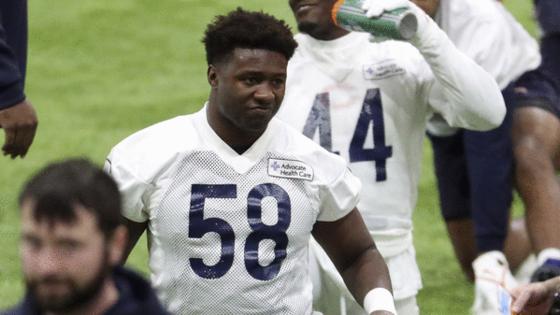 Here are three things we learned afterward from players.

1. The Bears removed linebacker Roquan Smith from the physically unable to perform list.

A day after Smith requested a trade from the Bears because of stalled contract negotiations, the team announced it took him off the PUP list, where he had resided since the first day of training camp.

Smith has staged a “hold-in,” which allows him to avoid being fined; he’s attending meetings and training at Halas Hall while not practicing. He has been at most practices to watch.

It’s unclear whether the Bears removed him from the PUP list to open options for a trade or contract extension — or because he really did recover from an undisclosed injury — after he released a bold statement to NFL Network on Tuesday saying the Bears didn’t value him and “refused to negotiate in good faith.”

Teammates Robert Quinn and Darnell Mooney said players would love to have Smith remain in the building. But they also expressed an understanding of why Smith applied pressure to the Bears with the statement.

“You see that all the time with players trying to put the heat on the organization just trying to get a deal done,” Mooney said. “It’s nothing that I can do or anything, so I’m just looking from far away.”

Quinn recalled watching defensive tackle Aaron Donald hold out when both were with the Los Angeles Rams in 2017. After holding out for a second straight training camp a year later, Donald eventually received a six-year, $135 million deal.