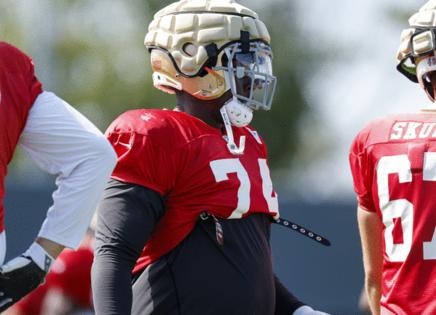 SANTA CLARA, Calif. — We’ll know more about the viability of Spencer Burford being a rookie starter at right guard for the 49ers once their preseason opener against the Green Bay Packers has concluded.

Pancake a few Packers and it’s all good. But get beat a handful of times and then the evaluation really begins for coach Kyle Shanahan and offensive line coach Chris Foerster.

“He says it all the time,” Shanahan said of Foerster. “You don’t know if an O-lineman can play until he gets his ass kicked in a game. How do you come back next week? Do you kind of hide? Or do you rise to the occasion and deal with it?

“That’s really what playing O-line is in the NFL, and you don’t know that until you give those guys opportunities.”

That’s why Burford, along with second-year left guard Aaron Banks, will get a long look Friday night against the Packers at Levi’s Stadium. Veterans, such as Trent Williams, Mike McGlinchey and Daniel Brunskill, will be brought along with Week 1 of the regular season in mind.

Unless you’re a line coach who understands all the angles and nuances of blocking schemes, it can be tough to assess who is standing out during training camp when there is no tackling to the ground. There’s an emphasis on footwork and being in position to strike as opposed to laying the wood to a teammate.

But it’s clear Burford, taken No, 134 overall, has made an impression because he’s been running with the first team since camp began.

Burford is encouraged but a long way from cocky.

“Has it surprised me? I knew I always had it in me,” Burford said Tuesday. “At the same time I’m not focused on the starting position or the second string position. I’m just here to play the game that I love and help the team win. If they find something in me, thank God. If they don’t, I’m going to keep working.”

It’s heady stuff and extremely challenging. The 49ers play in the same division as the Rams’ Aaron Donald, and at the moment the interior line starters are Banks at left guard Jake Brendel at center and Burford at right guard, with Brunskill available just about anywhere (including tackle) in a pinch. It’s a completely remade interior line in front of a first-year starting quarterback in Trey Lance.