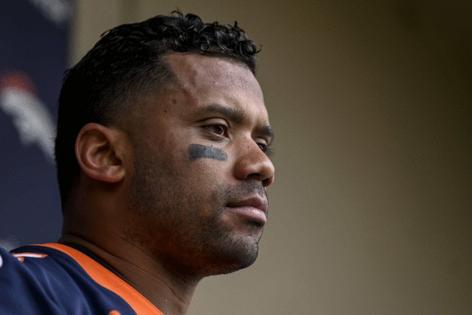 SEATTLE — I don't know what the most touching storyline was from Sue Bird's final regular-season home game Sunday.

Maybe it was the Climate Pledge Arena-record 18,100 fans showering her with affection. Maybe it was the video tributes from basketball legends such as Lauren Jackson, LeBron James and Geno Auriemma. Maybe it was Bird's emotional speech in which she mirrored her supporters' gratitude.

Could have been any of those. Not sure. But I damn sure know what the juiciest storyline was.

Among those giving video tributes Sunday was former Seahawks quarterback Russell Wilson, the signal caller behind the franchise's only Super Bowl win. The fans in attendance weren't so much thinking about that championship when he appeared on the JumboTron, though — they opted to boo him while on screen.

Wilson, as you know, isn't a Seahawk anymore. He forced his way out of Seattle in March to join the Broncos via a monster trade and has seemingly transitioned from eminent to enemy in the Emerald City. I mean ... booing a champion who might be the greatest player in Seahawks history? Jeering the man well-known for his contributions to the community, particularly his weekly appearances at Seattle Children's hospital?

Hey, no judgment here. Fans can cheer or chide anyone they see fit. But Sunday was telling — and it makes me think folks around here might be just as interested in the Broncos losing this year as they are in the Seahawks winning.

There is a practical element to this, of course. Seattle acquired Denver's first-round draft pick for next season in the trade, meaning the worse the Broncos finish, the higher the Seahawks select. Given the low expectations for the Seahawks this season — Vegas Insider has its over/under for wins at 5.5 — it makes sense for the 12s to want to look toward the future. But don't think schadenfreude isn't at play here, too. A lot of fans think Wilson betrayed them, and they want to see him fail.

Some might say: "Well, what about Ken Griffey Jr.!? He made it clear that he no longer wanted to stay in Seattle before the Mariners dealt him to the Reds, and he's a demigod in this town!" True, but that's a little different. Griffey grew up in Cincinnati. His father played 10 full seasons in Cincinnati, where he won two World Series and made three All-Star teams. Griffey Jr. was a transformational player who might have saved the Mariners from moving and was looking to head to his old home in Ohio.

Wilson never had that kind of connection with Denver, though. And his forever sunny disposition about Seattle stood in stark contrast to the man said to have told Seahawks management that he had no intention of coming back to the team despite having two massively lucrative years left on his contract.

No, his departure isn't like Alex Rodriguez ditching Seattle for the Rangers after five full seasons. It's nothing like the first time LeBron James left Cleveland. Wilson, though perhaps a supporting character at the time, helped give this city a Super Bowl and will almost surely be inducted into the organization's ring of honor one day. But that doesn't mean the die-hards around here don't feel scorned by a QB still in his prime.

Perhaps I'm making too much of a momentary reaction from a Storm game. A series of boos during a video tribute doesn't mean Wilson wouldn't get mobbed by half of Bellevue Square if he did a lap around the mall. He is a titan of this town — likely one of the faces of Seattle sports' Mount Rushmore. But last offseason, at 33, he peace'd outta here.

It's interesting how fans prioritize loyalty above most everything else. Richard Sherman, for example, developed a reputation for being an insubordinate diva who ripped on teammates and coaches before being arrested last summer on charges of burglary domestic violence. But when he appeared last June at a charity basketball game in Seattle, fans cheered him as if he were just minutes removed from "The Tip." Sherman did what he could to remain a Seahawk — the brass just wouldn't match the 49ers' offer at the time.

I can't peer into Wilson's brain, but I imagine he was pretty upset about the Sunday's boos at Climate Pledge. Dedicated as he is to craft, he appears equally committed to cultivating an airtight public image. You can try to gauge how the city feels about him based on social-media posts and news-story comments, but boos from a pro Seattle-sports crowd at a WNBA game? That might be the most revealing evidence yet.

Seahawks fans are gonna root for their team as passionately as they always do this season, but they're likely to root just as hard against the Broncos. Wilson's teammates might have receptions galore when Denver comes to Lumen Field in September — but Russell's reception from the 12s? Don't expect a lot of warmth.